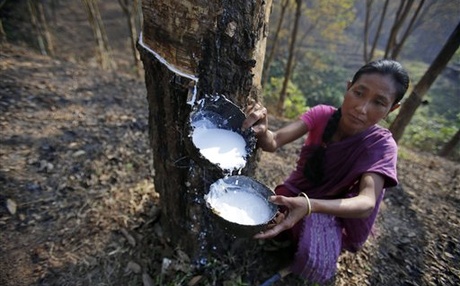 NEW DELHI:The BJP may be wooing K M Mani’s Kerala Congress—known otherwise as the “Rubber party’’—hard. But at the same time ‘rubber’ which changed the socio political framework of Kerala by creating numerous rubber millionaires is all set to say good bye to the state.

The Commerce ministry is considering shifting rubber plantations out of Kerala to make the cash crop more cost effective. It had been working on an expert committee report— Special Drive Rubber Plantation Development Scheme for Left Wing Extreme Affected States—circulated earlier this year for some time now and is in the process of fine tuning the implementation process.

The plan was originally mooted by the Home Ministry as a way to counter Maoist insurgency by developing rubber plantations there. The PMO approved it and asked the Ministry of Commerce to start working on it. This plan got an impetus as the price fall of natural rubber continues and there has been much hue and cry over it in Kerala, which produces nearly 85% of rubber in the country. With high labour costs, rubber cultivation is no longer cost-effective in Kerala. It will not be profitable for the farmers unless the price touches Rs 150 per kg and this is an impossible task given the fluctuation in international trade and also the inflow of artificial rubber,’’ an official with the Commerce Ministry said.

According to him, the government plan is to shift the cultivation to Northern states where the production cost is much lesser. The recent price fall of rubber had become a huge political issue in the state with every party staging dharnas even in Parliament premises.

Alluding to this, an official with the Rubber Board said that in states such as Jharkhand and Odisha where the production costs is very cheap, the price fall will not become a volatile political issue.

There is no immediate scope for price revival in the case of natural rubber and it is not prudent on the part of the government to offer floor prize to compensate the loss of farmers. Best is to shift the cultivation,’’ said the official.

But much depends on the volatile equation between the BJP and the Kerala Congress. If Mani takes the leap and joins the BJP, then the government cannot afford to shift the rubber base. It would be suicidal for both parties,’’ a source in the Rubber Board said.

Still, the uprooting plan is on within the ministry and it has identified 26 locations to start board offices and six regional offices. The ministry has already earmarked `866 crore towards this. The shift is indeed a bad news for Kerala as it accounts for the country’s 85 per cent rubber production.