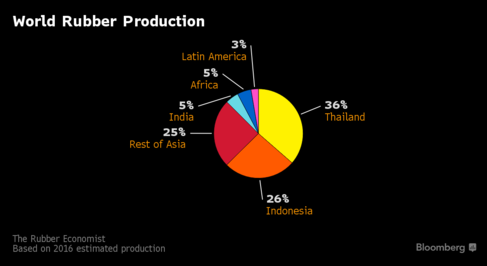 An attempt to bring together three Asian rubber producers on a single market faces one major hurdle: it’s still waiting for its first trade.

Asia’s regional rubber market, which will provide a platform for Thailand, Malaysia and Indonesia to physically trade the commodity, started on Sept. 26. So far, there hasn’t been any trades, said Stella Novita Lukman, vice president of product development at the Indonesia Commodity & Derivatives Exchange.

The three countries, which account for 68 percent of global production, agreed in 2014 to form a regional rubber market as a way to set a benchmark for physical prices. Rubber futures are already traded on exchanges in Asia including in Tokyo, Shanghai and Singapore. On Sept. 23, the Rubber Authority of Thailand approved five companies to participate in the regional market.

“It’s live, but not yet traded,” Lukman said in an interview at an industry conference in Selangor, Malaysia, on Wednesday. “The preparations for the three countries need to be longer. So we’re doing a lot of conferences, talking to buyers. I think we’ll need time to be able to make the trades happen.”

All market participants should become ICDX members and have to follow ICDX rules and regulations approved by the Commodity Futures Trading Regulatory Agency, according to Lukman. The rubber will be priced in U.S. cents per kilogram free-on-board export at loading ports and each contract will be 20.16 tons. Trading will take place Monday through Friday in two sessions, the first from 9 a.m. to 11 a.m. Jakarta time then 1 p.m. to 5 p.m.

“It still needs some time to be able to change the perception” as it is different to how companies currently trade physical rubber, Lukman said. Currently, buyers and sellers conduct private negotiations.

“The most important thing is the backbone is there,” Lukman said. “What we need is further promotion and education. Once that’s done, the infrastructure is already there, so it’ll be easier to just go.”