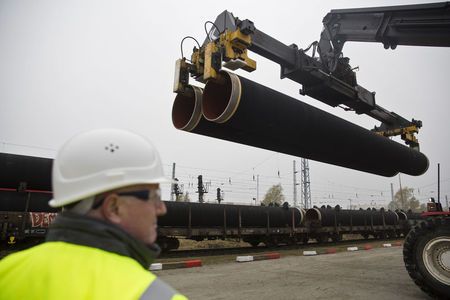 BRUSSELS/FRANKFURT (Reuters) – Russia has the European Union in a bind.

The bloc is divided between eastern European and Baltic Sea countries that see a new pipeline carrying Russian gas across the Baltic making the EU a hostage to Moscow – and those in northern Europe, most especially the main beneficiary Germany, for whom the economic benefits take priority.

The result, EU sources say, is that the EU executive, the Commission, sensing that there may ultimately be no legal basis to block approval of Nord Stream 2, is delaying it as long as possible, hoping to get past 2019 – the date when Russia must renegotiate a gas transit deal with Ukraine.

“There’s a difference between not supporting the project and having a legal basis to stop it,” said one EU diplomat, adding that the aim for now was “a break to avoid the project going anywhere in 2019”.

And for now, that means doing nothing, to the intense frustration of members such as Denmark, whose prime minister challenged the Commission at a summit of EU leaders this month to make good on strong words criticising the pipeline.

Last summer, seven eastern member states, all formerly dominated by Moscow and at the centre of an EU antitrust case accusing Gazprom of abusing its market dominance, sent a letter of protest to Commission President Jean-Claude Juncker. They too are still waiting for a clear response.

EU sources say the Commission is in fact cultivating uncertainty by hinting that the pipeline may fall foul of EU rules, in the hope of scaring off Western investors, for a time at least.

And in fact, last July, Gazprom’s Western partners – Uniper , Wintershall , Shell , OMV and Engie – did withdraw from pledges to provide 1.2 billion euros of equity for the pipeline, a twin to Nord Stream 1, which began pumping in 2011.

Germany is also not actively promoting the pipeline for now, with a parliamentary election looming this autumn. “The feeling is: ‘Why use up political capital to defend it?” said one EU diplomat.

Broadly, the plan to bring more Russian gas to Europe plays into deep divisions between EU nations over whether to do more business with Moscow while countering its military power plays in Ukraine and Syria.

Germany itself has taken a firm stance on maintaining economic sanctions against Russia over its annexation of Crimea and its support for rebels in eastern Ukraine.

But it also argues that EU market rules guarantee that the pipeline remains a purely commercial project, while eastern and Baltic states accuse President Vladimir Putin of exploiting energy exports as a geopolitical tool.

Meanwhile, littoral states that feel increasingly threatened by Moscow’s military posturing in and around the Baltic Sea want clarity from Brussels before going ahead with routine environmental assessments of Nord Stream 2.

“This has lots of geopolitical questions and it is not fair that one country should answer alone whether this is an good idea,” Danish Foreign Minister Anders Samuelsen said last month.

“This is not a question only for Denmark but for the European Union.”

Russia already accounts for one-third of EU gas imports, and that could rise with the help of Nord Stream 2, as Gazprom fights for market share with the EU’s domestic supplies decreasing.

It would also sharply reduce the need for Russia to export gas through Ukraine, where the EU is trying to support stumbling economic reforms. This would deprive Kiev of lucrative transit fees, and of a lever in its tortured relations with Moscow.

Hence the Commission’s desire to at least stall approval until 2019.

But sooner or later, EU sources grugingly admit that Russia’s determined push for Nord Stream 2 looks set to carry it over the numerous legal and financial hurdles in its path.

Gazprom’s Western partner firms say they are looking for new ways to share the financial burden, notwithstanding the uncertainty.

“If it isn’t stopped politically, its commercial logic will prevail,” one industry source said.

Gazprom is busily ordering steel pipes, renting facilities in Sweden, Finland and Germany and applying for permits to lay the 1,225 km (760 mile) pipe.

And Germany, by hosting the end-point of the 55 billion cubic metre a year pipeline, stands to grow into a gas hub for central, eastern and southern Europe, alongside the Dutch and British markets.

“What Germany wants, Germany gets,” said one official in Brussels.

In an opinion seen by Reuters, it the Commission argued last January for EU gas market liberalisation rules to be applied to Nord Stream 2, citing “serious diversification and security of supply concerns”.

But that was rejected by the EU’s own lawyers as well as the German energy regulator, the Bundesnetzagentur.

Responding this month to a missive from Brussels, the Bundesnetzagentur said Nord Stream 2 should simply be treated as an import pipeline like Nord Stream 1, Algeria’s Medgaz and Libya’s Greenstream.

To subject it to internal EU energy market rules would be “just as inappropriate as it would be improper”, the agency’s president, Jochen Homann, wrote in the March 3 letter, seen by Reuters.

Commission Vice President Maros Sefcovic said on Tuesday that talks with the agency were far from over, insisting that EU rules to promote competition passed since Nord Stream 1 was built should apply to the new pipeline.

“Key EU legal principles must also be respected in the offshore part of the pipeline,” he told Reuters. “We’ll negotiate with the German regulator how to secure that.”

He said the legal tussle should be dealt with via an intergovernmental agreement between Putin and German Chancellor Angela Merkel – which both sides have eschewed.

That would give the EU a chance to vet the deal under new rules, adopted on Tuesday, that give Brussels the power to vet oil and gas deals with outside countries to guard against anti-competitive practices and supply disruptions.

There are also legal questions over Eugal, a smaller pipeline intended to feed gas from the offshore Nord Stream 2 to Germany and beyond.

German regulatory sources say they will not approve Eugal until Europe’s highest court decides whether to uphold a deal between EU regulators and Germany to remove limits on Gazprom’s access to a similar pipeline running from Nord Stream 1.

That ruling could take up to two years, although an interim ruling is expected to give a signal within weeks.

Building up a case to comply with German regulation, five pipeline operators ran an auction this month that indicated demand from shippers for almost the full capacity of the Eugal pipeline over 20 years from 2019.

When Sweden’s government voiced national security concerns over Gazprom using the island of Gotland as a base for construction, several other ports stepped forward hoping to win the business. The chosen site, Karlshamn, stands to benefit from 100 million SEK ($ 11.3 million) worth of business.

“Money talks,” said one EU diplomat. “If it’s not illegal, then politically there’s little we can do.”

One senior German industry source put it bluntly: “I don’t care where the gas comes from as long as they are pumping more.” ($ 1 = 8.8208 Swedish crowns)