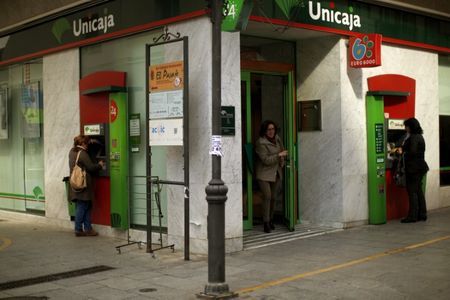 MADRID (Reuters) – Mid-sized Spanish lender Unicaja is moving ahead with a long-mooted stock market listing, joining a rush of initial public offerings (IPO) in Spain in the first few months of the year.

Unicaja, which put off listing its shares last year when market conditions were tougher and Spain was mired in political instability, said in a statement late Friday it would ask for shareholder approval on April 26 to issue new stock.

It said it aimed to issue 625 million new shares with a nominal value of one euro each, with the final price of the offer depending on demand. Unicaja added the timing of its listing was not yet set in stone.

A stock market rally this year has encouraged more Spanish companies to go public after a hiatus for much of 2016 when the country was without a proper government for 10 months following two inconclusive elections.

Home builder Neinor is due to list next Wednesday, and car parts maker Gestamp is due to make its stock market debut in early April in one of the biggest IPOs in Europe this year.

Unicaja’s looming listing also adds to signs of life in Spain’s banking sector as the government tries to recoup some of the funds spent on bailing out lenders crippled by a real estate crash, which forced it to request a European aid package for the weakest banks in 2012.

Unicaja was not rescued but benefited from funding injected into smaller CEISS bank, which it bought in 2014. It had been due to list as a condition of its merger with CEISS, but obtained a grace period from Europe.

State-controlled lender Bankia , the biggest beneficiary of the European bailout funds, is now due to be merged with a smaller rescued bank, BMN.

A privatisation of those banks, which together hold 230 billion euros (196 billion pounds) of assets, would mark one of the final steps in cleaning up Spain’s banking sector.