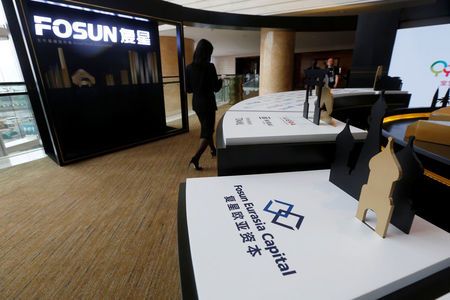 China’s Fosun CEO and VP step down in surprise reshuffle

HONG KONG (Reuters) – Fosun International Ltd <0656.HK>, one of China’s most aggressively acquisitive conglomerates, said its chief executive and vice president stepped down in a surprise reshuffle that has raised concerns over the group’s strategy.

The resignation of co-founder and Chief Executive Liang Xinjun and Senior Vice President Ding Guoqi will have some impact on the leisure-to-insurance group, one of China’s largest privately held firms, said chairman and fellow co-founder Guo Guangchang.

“The departure of Ding Guoqi and Xinjun, in particular that of Xinjun due to health reasons, will have an impact on Fosun in the short-term,” Guo told reporters and analysts in Hong Kong, without elaborating.

“But we have to turn bad things into good news. As you all see today, the new management team, Fosun is full of talents.”

Ding, a long-time board member and former chief financial officer, stepped down from the group due to family commitments, the company said in a statement to the Hong Kong exchange late on Tuesday.

Unusually for a Chinese company, Liang and Ding will have no honorary position in the company.

Several sources close to Fosun said there had been growing tensions between Guo and Liang. On Wednesday, Guo said he had been especially “hard and demanding” on Liang but said he, Liang and Wang – college mates who went on to work together for 25 years – remained as close as ever.

“Xinjun, Wang Qunbin and myself have never abandoned each other, we are like brothers. Xinjun has made a great contribution to Fosun’s development today,” Guo said.

Liang had been instrumental in driving the group’s acquisition strategy, taking on a more prominent role as Guo became embroiled in an investigation on the Chinese mainland in 2015. (http://www.reuters.com/article/us-fosun-intl-chairman-idUSKBN0TX01Y20151214)

The company’s shares opened up initially but then quickly steadied on Wednesday. Its bonds traded slightly lower on fears the departure of two of the group’s key executives could hurt its acquisition strategy amid a broader Beijing crackdown on overseas dealmaking, said analysts.

“With the latest announcement, one more founder together with another key personnel have left. This may raise concerns on the company’s business and financial strategy going forward and that’s why bonds are trading lower,” said Annisa Lee, a Nomura credit analyst.

Tuesday’s reshuffle came as the group reported a net profit jump of 28 percent to a record high of over 10 billion yuan ($ 1.45 billion), but investor worries were growing over the group’s ability to keep up its performance as it becomes tougher to get money out of China.

Guo and chief financial officer Robin Wang said the restrictions were a “challenge” for the group but that it continued to have several means of raising capital offshore.

Guo emphasised the group’s strategy to contain funding costs while investing heavily in new technologies, including artificial intelligence and automation.

Liang, who owns 24 percent of the group and has a personal fortune worth $ 2.2 billion according to Forbes Real-Time Billionaires List, had been the public face of Fosun, particularly around the battle for Club Med.

For Fosun, that has included bets on everything from Portuguese insurance to Britain’s Thomas Cook Group and One Chase Manhattan Plaza, the headquarters of JPMorgan, bought in 2013.