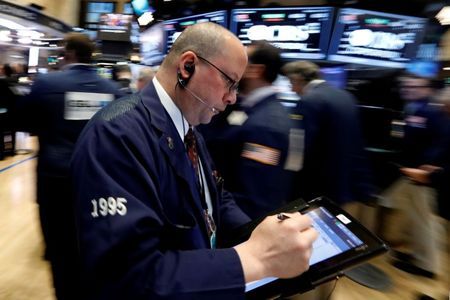 NEW YORK (Reuters) – An index of world stocks dipped on Friday as investors locked in a quarterly gain that has given equities their best start to a year since 2012, while oil finished its worst quarter since 2015.

U.S. stocks ended down slightly as investors weighed whether upcoming corporate earnings reports will be strong enough to justify the market’s lofty valuations.

The S&P 500 index is trading at about 18 times earnings estimates for the next 12 months, compared with its long-term average of 15.

For the quarter ending Friday, the S&P 500 gained 5.5 percent, its strongest first-quarter performance since 2013 and best gain of any quarter since the last quarter of 2015.

“Valuations are as stretched as they ever get,” said Bruce Bittles, chief investment strategist at Robert W. Baird & Co in Nashville. “Certainly that’s cause for concern if earnings don’t grow the way they are anticipated to grow.”

Over 40 strategists polled by Reuters in the past week expected the S&P 500 to rise by just another 2 percent by the end of the year.

Brent oil settled down 13 cents at $ 52.83 a barrel and the contracts have lost around 7 percent since the previous quarter, also the biggest quarterly decline since late 2015. U.S. crude futures rose 25 cents to settle at $ 50.60.

Traders have been searching for signals that the Organization of the Petroleum Exporting Countries’ production cuts are effective or that U.S. production is continuing to offset efforts to rebalance the market.

U.S. Treasury debt yields fell after a chorus of Federal Reserve officials questioned the need for a faster pace of interest rate increases given tame inflation and just modest growth in the U.S. economy.

The dollar index <.DXY>, which tracks the greenback against six rival currencies, was little changed from its late Thursday levels.

Over the quarter the greenback has fallen 1.7 percent, its worst showing in a year, partly on doubts that U.S. President Donald Trump was not prioritising, and did not have the necessary power to push through Congress, the economic reforms that had driven the dollar to 14-year highs at the start of the year.