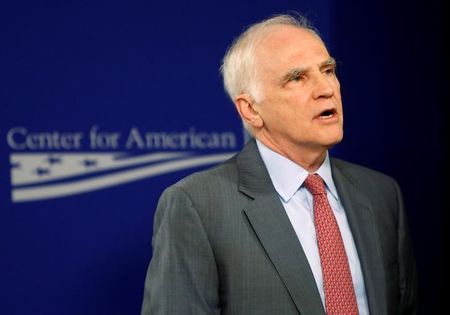 PRINCETON, N.J. (Reuters) – The Federal Reserve’s top regulator, about to step down after a career defending tough restrictions on big banks, on Tuesday conceded during his last speech as a U.S. central banker that he now believes some rules adopted after the financial crisis have proven too complicated and should be adjusted.

Daniel Tarullo, a Fed governor since the depths of the crisis in early 2009, said the existing so-called Volcker rule has proven unworkable and that annual “stress tests” of the top Wall Street banks may not need a qualitative review as they do now.

Tarullo, who leaves the Fed on Wednesday, has long been seen as among the most hard-charging U.S. regulators and an ardent supporter of the 2010 Dodd-Frank financial legislation that has come under fire from the Trump administration and Republican-controlled Congress.

“There are areas where I think the case for change has become fairly strong,” he said in a speech at Princeton University. “As it has been drafted and implemented, the Volcker rule is too complicated.”

The rule, named after former Fed Chairman Paul Volcker, was meant to prevent banks from using customer deposits to make speculative bets for the banks’ own accounts, called proprietary trading. Banks resisted the rule on grounds such trading is hard to define. Proponents say such trades worsened the crisis and drove unethical behaviour.

Tarullo largely defended Dodd-Frank, saying the law boosted financial stability. But he said yearly stress tests for banks that consider both their financial health and subjective concerns like management can be adjusted over time to drop qualitative benchmarks.

Tarullo, 64, is stepping down at an uncertain time for the central bank, which helped author the Wall Street rules meant to prevent future financial shocks that rock the economy and require taxpayers to bail out banks as in 2008 and 2009.

Still, former President Barack Obama, who originally nominated him to the Fed, never officially offered him the unfilled job of vice chair for supervision. That means President Donald Trump can name someone and quickly revamp Dodd-Frank. It may have hastened Tarullo’s departure, announced in February.

Tarullo said massive laws such as Dodd-Frank typically require adjustments in the months after passage. “But partisan divisions prevented this from happening,” he said.

“As proposals for regulatory change swirl about,” he added, “neither regulators nor legislators should agree to changes that would effectively weaken” the strong capital regime now applied to the largest banks.

“It would be tragic if the lessons of the financial crisis were forgotten so quickly,” Tarullo said.

In a separate development at the Fed earlier on Tuesday, Jeffrey Lacker, president of the Richmond Fed, abruptly announced he was resigning after admitting a conversation he had with a Wall Street analyst in 2012 may have disclosed confidential information about Fed policy options.