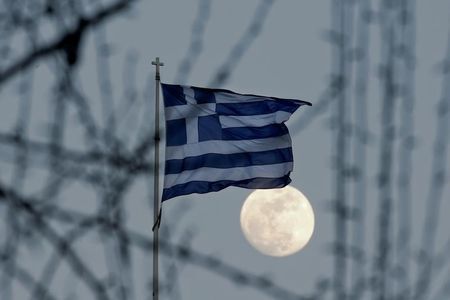 ATHENS (Reuters) – Greece has agreed with its international creditors on a plan to cut the corporate tax rate by 3 percentage points to 26 percent in 2020 if it outperforms on its bailout-prescribed fiscal targets, the leftist Avgi newspaper said in its Sunday edition.

Athens struck a deal with its international lenders on Friday on the key elements of a reform package that could unlock bailout funds for the country, helping it repay debt that matures in July.

The leftist-led government agreed on measures that will cut government spending on pensions by 1.0 percent of economic output from 2019, a year after its bailout expires.

It also committed to tax reforms in 2020 to generate additional revenue equal to another 1 percent of gross domestic product, mainly by lowering the current income tax exemption threshold.

The reforms were prescribed by its official lenders to convince the International Monetary Fund, which remains sceptical about Greece’s fiscal and reform progress, to take part in its 86 billion euro (74 billion pound) bailout, its third such package since its debt crisis emerged almost eight years ago.

To make the deal more palatable for Greece, which will hold national elections in 2019, the lenders agreed that if budget savings targets are exceeded, Athens will be allowed to implement relief measures to boost the economy.

Greece’s target is for a budget surplus before debt servicing of 3.5 percent of GDP in 2018 and thereafter to be maintained at that level over the “medium term”.

There is no agreement yet on what exactly “medium term” means and the ministers did not discuss this during Friday’s Eurogroup meeting.

The Avgi newspaper said the relief measures will include a lower real estate tax for low and middle-income taxpayers and a 2 percentage-point cut in the income tax rate to 20 percent for those earning 8,600 to 20,000 euros annually.

Bailout inspectors are expected to put the finishing touches to the deal, which will then need to be approved by euro zone finance ministers. A date for their return to Athens has not yet been set.