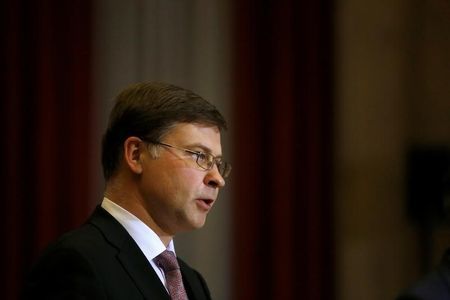 Rome has to adopt by the end of April new belt-tightening measures to boost revenues by at least 0.2 percent of its gross domestic product to avoid an EU disciplinary procedure for the country’s increasing public debt.

The measures prepared by Italy’s finance minister Pier Carlo Padoan “seem to be in line with what has been discussed and recommended by the Commission,” Valdis Dombrovskis told reporters after he met the Italian minister on the sidelines of a meeting of EU finance ministers in Valletta, Malta.

The Italian government will discuss the measures on Tuesday, Padoan told reporters in a separate news conference.

However, it remains unclear whether all ministers will agree with Padoan’s plans, whose details remain unknown.

Italy’s former prime minister Matteo Renzi, who still runs the main party underpinning the government, set red lines on what Padoan can offer Brussels, saying the minister should row back on a commitment that it would raise excise duties.

The measure is seen by Renzi as unpopular and could weaken his chances of winning upcoming elections, while eurosceptic parties are on the rise and lead the polls.

Dombrovskis’ remarks were seen as a way to strengthen Padoan’s hand in view of next week Italian government’s talks.

An EU disciplinary procedure could bring in the long-run to financial sanctions, although this has never happened.

The immediate effect could however be to increase market pressure on Italy’s sovereign debt, at a time when the county could face further risks due to the tapering of the European Central Bank’s very accommodative monetary policy.