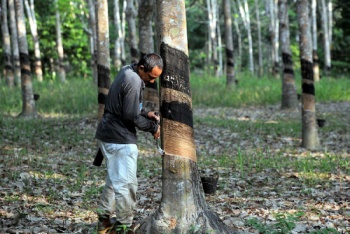 Nevertheless, he said other initiatives introduced by the ITRC managed to curb prices from eroding further and helped boost prices, at least in the short term.

“ITRC member countries currently account for about 67% of the total NR produced in the world. \’ “Hence, initiatives introduced by the council have been able to influence NR prices to a certain extent only and not comprehensively,” he said in reply to Datuk Hgeh Koo Ham (DAP-Beruas) who asked why the ITRC has not been able to stabilise NR prices at a satisfactory level.

ITRC was established after the Bali Declaration was signed by Thailand, Indonesia and Malaysia in Bali on Dec 12, 2001, with the objective to ensure remunerative and fair NR prices for rubber smallholders in all three member countries.

He said to enhance ITRC\’s role in influencing global NR prices, Vietnam, currently, the world\’s third-largest producer of natural rubber after Thailand and Indonesia was accepted as a member of the council.

“Vietnam\’s participation resulted in rubber production increasing to 76% from 67% and exports rising to 89% from 76%,” he said.

Responding to a supplementary question from Ngeh, who wanted to know what action would be taken against Thailand and Indonesia for non-compliance, Datu Nasrun said the ITRC did not mandate any member country to take action against another member country. — Bernama

Vietnam: Over 100,000ha of rubber plantations to get sustainable forest management...

Rubber to be cultivated across 1,000 hectares in Moneragala