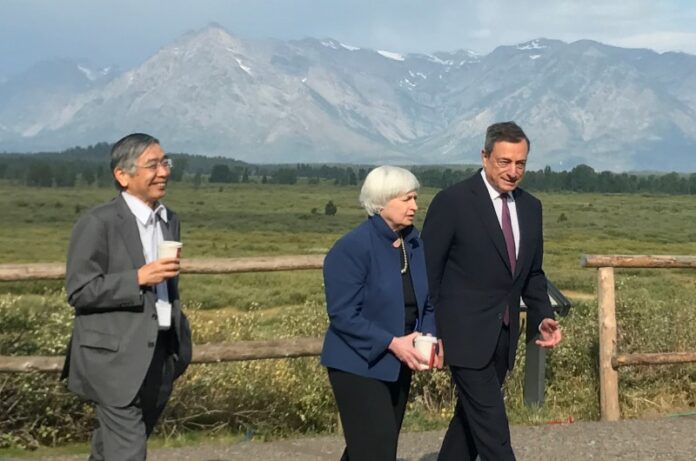 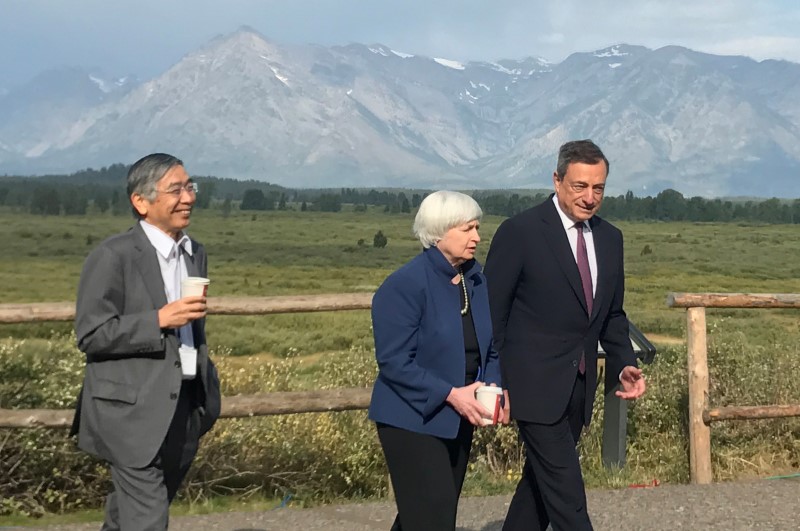 © Reuters. Governor of the Bank of Japan Kuroda, United States Federal Reserve Chair Yellen and President of the European Central Bank Draghi walk after posing for a photo opportunity during the annual central bank research conference in Jackson Hole

LONDON (Reuters) – A flattening of government bond yield curves that may presage an economic downturn could prompt verbal interventions in the coming week by central bankers still struggling to hit this cycle’s inflation targets.

The subject? “Challenges and opportunities of central bank communication.”

Curve-flattening on both sides of the Atlantic, but more markedly in the United States, suggests investors have doubts over the future path of inflation and may be starting to price in a downturn just as the global economy picks up speed.

Since the Fed began raising rates in 2015, the difference between long- and short-term U.S. yields has shrunk to levels not seen since before the 2008 financial crisis, reaching 67 basis points

That partly reflects uncertainty about the passage of a Republican-sponsored bill to cut U.S. taxes, which has hauled down longer-term projections of inflation while expectations for upcoming rate increases push short-term yields higher.

With curve-flattening typically signaling a muted outlook for both growth and inflation, the trend suggests investors see a risk that the Fed’s current monetary tightening cycle will start to slow the world’s biggest economy.

A flatter curve, which makes lending less profitable, also poses a risk to the banking sector, nursed back to fragile health by central banks after it nearly collapsed a decade ago. But with crisis-era policies still largely in place, how would central banks cushion the impact of a downturn?

S&P Global Ratings said in the past week that it sees a 15-20 percent risk of a U.S. recession in the next 12 months based on economic conditions, government policy uncertainty and continued gradual tightening by the Fed.

Citing economic indicators that show the expansion is either in or approaching a late cycle — though not overheating — it forecast robust GDP growth in the second half of 2017.

“Still, monetary policy risk remains in the coming months that is not captured in our quantitative assessment,” S&P said.

“The economy has now more or less closed the output gap …That means monetary policy is more likely to transition away from the current accommodative stance.

“Furthermore, if a sizeable fiscal stimulus from the U.S. government is to indeed go through in the coming months, it increases the chance of the Fed tightening policy more aggressively.”

Market expectations that the Fed will continue to tighten gradually have generally been preserved by U.S. President Donald Trump’s decision to appoint Jerome Powell as Fed Chair when Yellen’s term expires in February.

But with a number of Fed vacancies to be filled, analysts at ING say the policy-setting Federal Open Market Committee could yet take on a hawkish hue.

“The combination of upside risks to growth and mounting inflationary pressures, as well as a hawkish rotation in the make-up of Fed voters, suggests that markets are too cautious in only pricing in one (rate) hike next year,” they wrote.

“We’re expecting a December rate hike, and these various factors mean there is upside risk to our call for two further rate rises next year. What’s more, the long end of the (yield) curve will also have to deal with additional supply from the Fed’s balance sheet reduction programme.”

Powell, a 64-year-old Fed board governor and former investment banker, will take over an economy that has been expanding for more than eight years and where unemployment has fallen to its lowest since the early 2000s.

Under his leadership the Fed is widely expected to continue to raise borrowing costs gradually, as Yellen began to do in late 2015, and to shrink the central bank’s $4.5 trillion balance sheet.

It has raised rates twice this year and is widely expected to do so again — to a target range of 1.25 to 1.5 percent — next month.

The hunt for returns drove the German yield curve, Europe’s benchmark, to its flattest in about two months in the past week, though that trend was reversed on Thursday and Friday.

Market measures of long-term inflation expectations in the bloc have risen in recent months but remain well below the ECB’s near-2-percent target, giving funds confidence that the value of those investments will not be materially eroded.

The ECB’s decision last month to extend its asset purchase program until at least September and pledge to keep rates at record lows until well after that scheme ends have helped push bond yields across the bloc to multi-month lows.

The European Commission said on Thursday that it expected the euro zone economy to grow at its fastest pace in a decade this year before slowing somewhat. A flash estimate of third-quarter GDP in the euro area will be released on Tuesday and October’s inflation reading on Thursday.

A clutch of other Fed policymakers will also be out and about, while Draghi, Kuroda and Carney are all due to make speeches during the week.