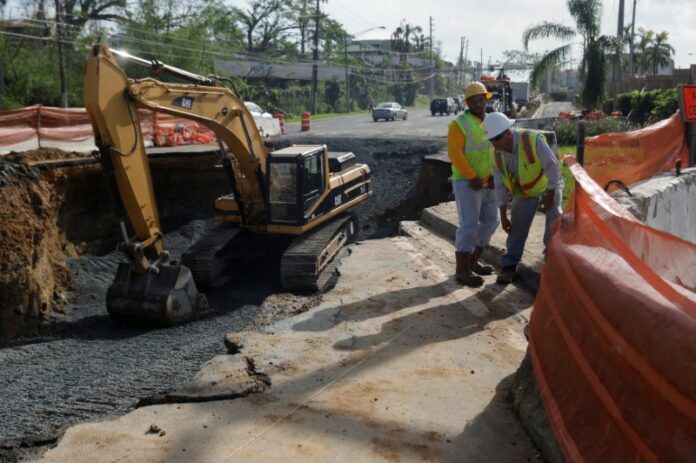 In Puerto Rico, a sinkhole of rebuilding struggles 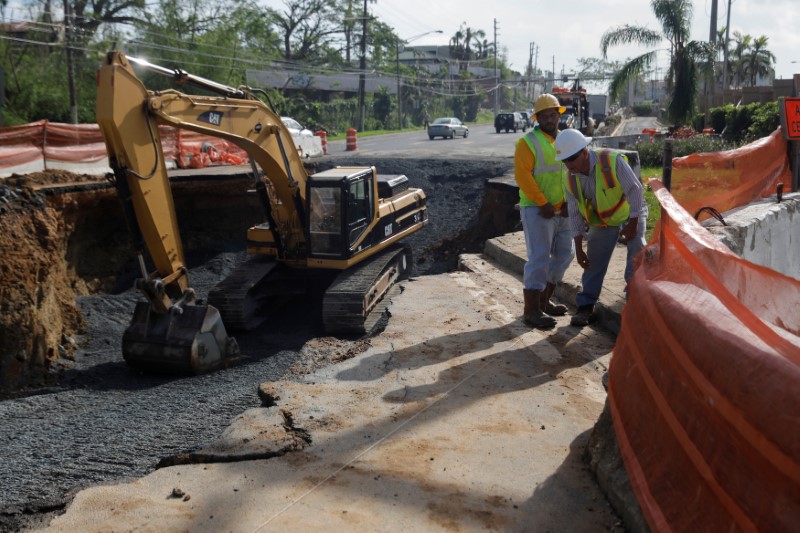 © Reuters. Workers survey damage next to a sinkhole at a construction site along Puerto Rico Highway 2 caused by Hurricane Maria outside San Juan

Previous rains had suspended work, as workers watched earth fall back into the hole.

“It has not wanted to stop raining” since Hurricane Maria, said Carlos Rivera, a 26-year-old contract worker at the site last month.

Cars backed up for miles along Puerto Rico Highway 2 on either side of the colossal construction site, which swallowed four of five lanes. The 20-foot crater was among thousands of sites damaged by a storm that exposed an already fragile infrastructure in Puerto Rico, decimating water, power and roadways all at once.

Fixing just this one sinkhole required maneuvering a set of vexing logistical and financial hurdles that reveal why rebuilding this isolated island will take so much more time and work than in any storm-ravaged region of the mainland United States. The hole is only one of 3,500 reported incidents of hurricane damage to Puerto Rico-owned roadways, with repair costs estimated at $250 million.

A U.S. territory, Puerto Rico was already in trouble when Maria hit on Sept. 20 as the strongest storm to strike the island in nine decades. Its economy had been in recession for a decade, pushing the island into bankruptcy to restructure about $120 billion in bond and pension debt.

The task of rebuilding is made that much harder by the challenges and expense of bringing supplies and equipment to an island, which will depend heavily on U.S. aid and likely struggle to finance its expected share of the rebuilding.

One of the casualties was this stretch of Highway 2, the vital 143-mile artery between San Juan and Ponce. Running west from San Juan before looping south, the road transports thousands of people a day between the San Juan suburbs and the island’s bustling capital.

Hurricane Maria’s rains flooded the pipes under Highway 2 until one burst. Water gushed out of the old pipe deep below the roadway, scouring out a hole into which the ground eventually collapsed.

Officials could not ignore the sinkhole, which squeezed eastbound traffic into a single westbound lane and detoured westbound traffic. Tempers began to fray as residents endured a one-mile drive for nearly an hour.

NO POWER, NO PHONES, NO TRUCKS

The most pressing problem facing Contreras was logistics: how to rebuild a road with no power, limited trucks, no electrical light, and no cell phones. As of this week, less than half the island’s power had been restored, according to the Puerto Rico Electric Power Authority.

Puerto Rico’s antiquated electric grid was decimated by the storm and now needs a complete rebuild.

Electricity is required to run the machinery used for extracting rock and other raw materials to produce asphalt. Since the storm, contractors have had to bring in diesel-powered generators to power the machinery, a cumbersome and expensive task, Contreras said.

“That’s something that’s happening in every industry here,” creating a shortage of generators, Contreras said.

Another scarce commodity: trucks. With much of the population cut off from power and communication, the island was forced to divert hundreds of trucks and drivers to help bring supplies to needy citizens.

That left few vehicles behind to transport the equipment and materials needed to fix infrastructure, including Highway 2’s sinkhole.

“The truck drivers, many have been hired by other companies,” the secretary said.

Among those competing for trucks: Puerto Rico’s own water and sewer authority, known as PRASA.

PRASA president Eli Diaz-Atienza told Reuters in an interview in October that his agency had just 125 trucks to service the island’s 3.4 million residents. He has requested trucks from FEMA, tapped the U.S. Army National Guard for vehicles, and contracted with private sector firms to repurpose vehicles such as milk trucks.

Replacements for damaged traffic signals at all of Puerto Rico’s 1,200 intersections must be flown to the island from the states, a more expensive and complicated process than trucking them.

“We don’t have those supplies here in Puerto Rico because we never had to repair the equipment at all of the intersections at once,” Contreras said.

Through it all, communications remain a problem. With cell

service iffy, the roads department has resorted to using runners who travel hours to areas of the island without phone service to relay reports of damage. The travel time and word-of-mouth communication has led to incorrect, incomplete or confusing information and further delays, Contreras said.

“Sometimes we get a description of a problem, and then when we send the technical people, it’s a completely different story,” he explained.

One problem this particular sinkhole managed to avoid was money. Because it lay on a major thoroughfare, Contreras decided to prioritize it, funding repairs with an expected $1 million of the $42.5 million in emergency funds from the Federal Highway Administration.

Puerto Rico officials could not be reached for comment on the final costs and time required to repair the roadway. But a Reuters witness who drove down Highway 2 this week said the area had been paved over and traffic was moving easily.

The triage process that pits some rebuilding projects over others reflects the broader financial ruin in Puerto Rico.

Initial U.S. aid packages won’t be nearly enough, so agencies like PRHTA – and cities and towns, too – will rely heavily on the U.S. Federal Emergency Management Agency to finance rebuilding over the long term.

“No municipality in Puerto Rico has the money to build the infrastructure that’s needed,” said Angel Perez, mayor of Guaynabo, where damage to municipal property is estimated at $25 million to $30 million – a big hit for a San Juan suburb whose total budget is about $130 million.

Cash-strapped cities and towns here are also scrambling to pay up front costs of rebuilding projects.

In a major emergency, Puerto Rico is treated the same as a U.S. state, a FEMA spokesman said. It is eligible for the same FEMA aid and other types of federal funds made available when a state suffers a catastrophe, he said.

Rebuilding aid is typically conditioned on a cost-sharing agreement that would require Puerto Rico to match a quarter of expenses. That share was reduced to 10 percent this month, the White House said.

Still, Puerto Rico’s financial crisis and the crippling blow of the storm mean the territory could still be hard-pressed to put up its share.

The longer projects take, the more costly they get, Contreras said, as relentless Caribbean rain continues to erode damaged stretches of highway, particularly those buried by mudslides.

At the Highway 2 sinkhole, construction worker Silvano Monica, 62, said the work was just a small start: “There are roads and bridges with problems like this all over the island.”