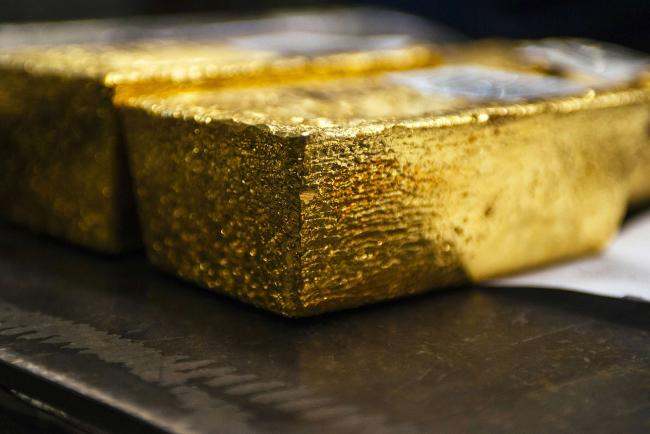 © Bloomberg. Gold bullion bars sit following casting at the Rand Refinery Ltd. plant in Germiston, South Africa, on Wednesday, Aug. 16. 2017. Established by the Chamber of Mines of South Africa in 1920, Rand Refinery is the largest integrated single-site precious metals refining and smelting complex in the world, according to their website.

(Bloomberg) — Trades that moved about 4 million ounces of gold in a matter of minutes awakened the precious metal from its slumber.

The trades jolted the market, which has seen 60-day historical volatility languishing near the lowest since 2001. The metal has struggled to sustain the pace of gains from earlier this year as the outlook for rising U.S. borrowing costs curbs demand for non-interest-bearing assets like gold.

“We didn’t see any headlines, any news to make gold drop $10, but it just did,” Miguel Perez-Santalla, a sales and marketing manager at Heraeus Metals New York LLC, said by telephone. “It’s going with someone who has a huge position that can trigger stops and make the market move in a direction.”

The trades accelerated a market exodus. In the half hour ended 11:30 a.m. volume reached 63,384 contracts. for delivery in December settled 1 percent lower at $1,274.20 an ounce at 1:46 p.m. If the mysterious trades within that half hour were paid at the settlement price (which was unlikely), they would have been worth more than $8 billion.

The bullion market has seen similar mysterious trades in the past few months.