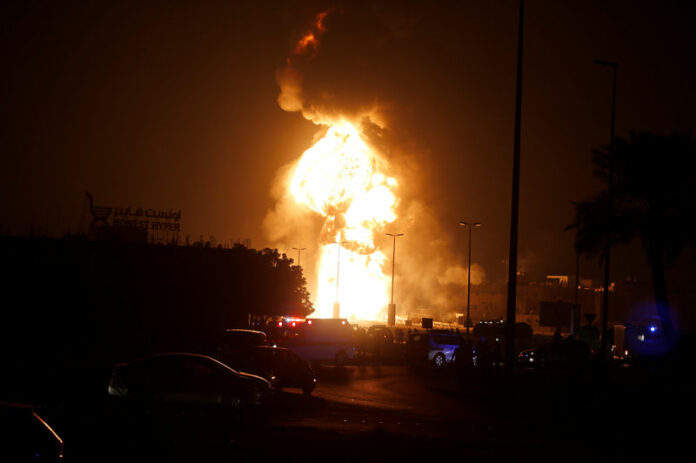 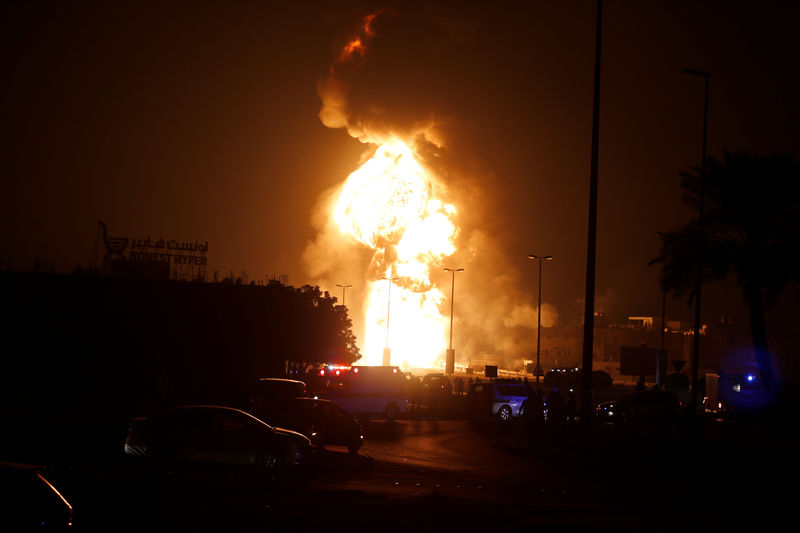 © Reuters. Emergency and rescue workers are seen blocking the road leading to a fire in at oil pipeline in Buri village south of Manama

KHOBAR, Saudi Arabia (Reuters) – Bahrain said an explosion which caused a fire at its main oil pipeline on Friday was caused by “terrorist” sabotage, linking the unprecedented attack to its arch-foe Iran, which denies any role in the Gulf island kingdom’s unrest.

A key Western ally and host to the U.S. Fifth Fleet, Sunni Muslim-ruled Bahrain has for years grappled with protests and sporadic violence coming from its Shi’ite majority.

“The incident was an act of sabotage and a dangerous act of terrorism aimed at harming the higher interests of the nation and the safety of the people,” the ministry said on its website.

“Terrorist acts witnessed by the country in the recent period are carried out through direct contacts and instructions from Iran,” the statement quoted Interior Minister Sheikh Rashid bin Abdullah al-Khalifa as saying.

Bahraini authorities said they had brought under control the fire at the oil pipeline.

State-run Bahrain Petroleum Company (Bapco) closed the flow of oil to the stricken pipeline, the civil defense said in a statement earlier on Saturday.

Residents close to the incident near Buri village, some 15 kilometers (10 miles) from the capital Manama, were being evacuated to a safe shelter, the statement added.

Saudi Arabia’s energy ministry said pumping to Bahrain had been suspended and the kingdom was stepping up security precautions at its own facilities.

“The attack on the pipeline … was followed by the suspension of the pumping of oil to the State of Bahrain,” the Saudi Ministry of Energy, Industry and Mineral Resources said.

“The Ministry of Energy also confirmed that it has increased its security precautions at all its facilities, and that all these facilities enjoy the highest levels of protection and safety,” it added in a statement.

Bahrain relies on the Abu Safa oilfield for the majority of its oil. It shares the field with Saudi Arabia. Oil to Bahrain is transported via the 55 km A-B pipeline which has a capacity of 230,000 barrels per day (bpd).

A new 350,000-barrels per day oil pipeline between the two countries will be completed next year and will serve the planned expansion of Bahrain’s refinery capacity.

Arabian Light will flow from Saudi Aramco’s Abqaiq plant via the 115-km new pipeline, 73 km of which will run overland and the rest under the Gulf.