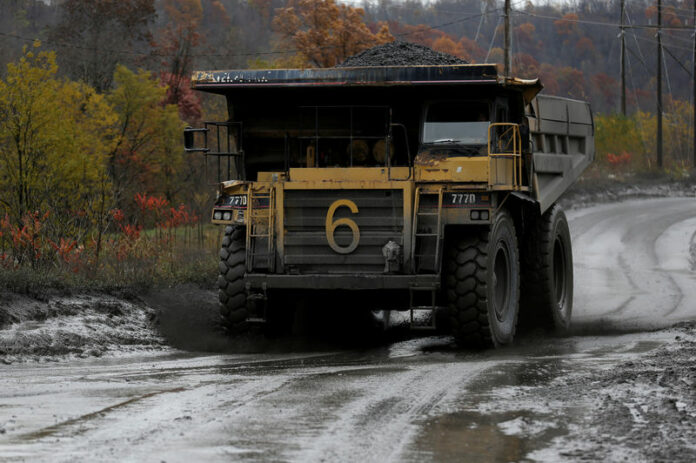 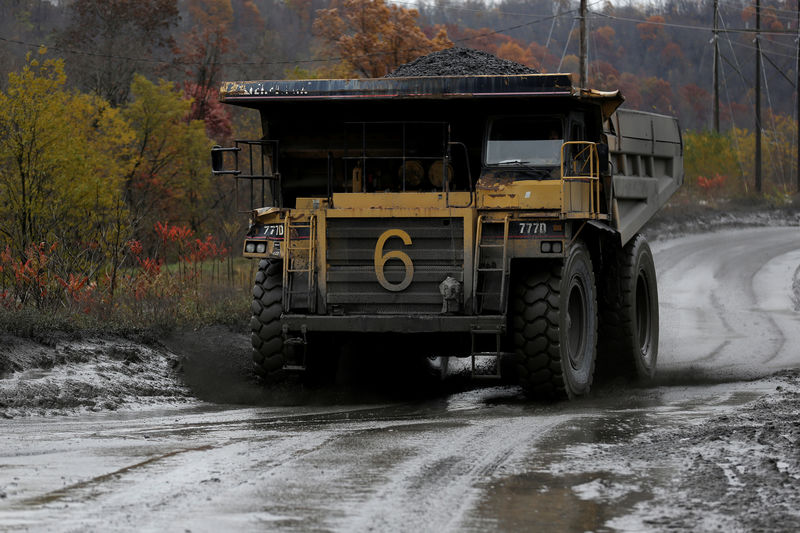 © Reuters. A heavy dump truck carries waste rock, known as gob, from coal mining operations at the Century Mine in Beallsville, Ohio

WASHINGTON (Reuters) – A year after Donald Trump was elected president on a promise to revive the ailing U.S. coal industry, the sector’s long-term prospects for growth and hiring remain as bleak as ever.

A Reuters review of mining data shows an industry that has seen only modest gains in jobs and production this year – much of it from a temporary uptick in foreign demand for U.S. coal rather than presidential policy changes.

U.S. utilities are shutting coal-fired power plants at a rapid pace and shifting to cheap , along with wind and solar power. And domestic demand makes up about 90 percent of the market for U.S. coal.

“We’re not planning to build any additional coal facilities,” said Melissa McHenry, a spokeswoman for American Electric Power, one of the largest U.S. utilities. “The future for coal is dictated by economics … and you can’t make those kinds of investments based on one administration’s politics.”

Coal plants now make up 47 percent of AEP’s capacity for power generation, a figure it plans to shrink to 33 percent by 2030.

(For a graphic on coal production, demand and employment, see: http://tmsnrt.rs/2zKY1tQ)

The situation highlights the limitations of presidential policy on major industries and global economic trends. As some energy experts have said all along, the forces that will make or break mining are well beyond the powers of the Oval Office.

A White House official did not respond to a request for comment.

Trump has likely done all he can do to help the industry, said Luke Popovich, a spokesman for the National Mining Association, which represents major U.S. coal companies.

“The government is no longer against us,” he said. “We now only have market forces to contend with.”

Trump has taken action on many promises he made to coal interests in states that helped him win the election.

Now Trump’s Energy Secretary, Rick Perry, is attempting to push a rule through the independent Federal Energy Regulatory Commission that would subsidize power plants that store at least a 90-day supply of coal on site. The goal is to extend the life of some coal burning power plants, a move Perry says will make the electric grid more reliable.

While the full impact of Trump’s coal policy could take years to understand, the changes so far are unlikely to boost domestic demand, energy analysts and utility officials said.

Trump has cast the coal industry as a victim of burdensome regulation.

The industry has lost more than 40 percent of its work force in less than a decade and seen production drop to its lowest levels since 1978. Its share of the power market has fallen to less than a third from about half in 2003.

“We’re going to bring the coal industry back 100 percent,” Trump said at a rally in Virginia in August of 2016.

So far, progress has been limited.

U.S. coal production is on track to rise more than 8 percent in 2017 over the previous year, to 790 million tons, according to the Energy Information Administration. But 2018 output is expected to decline.

On November 1, Trump cited the modest production increases in a Tweet, saying, “It is finally happening for our great clean coal miners!”

But these increases are largely attributable to demand for U.S. coal from Asian steel mills after temporary outages from their usual suppliers in Australia, according to James Stevenson, a coal analyst at IHS Markit.

Forecasts from utilities and the U.S. government reveal little reason for hope of a sustained coal rebound.

Three Texas coal plants owned by Vistra Energy Corp subsidiary Luminant are among the latest to close, bringing the number of plants that shut, or plan to, to 265 since 2010 – a figure higher than the 258 plants that remain, according to the Sierra Club, which has campaigned against coal.

Vistra said the closures were forced by lower prices for natural gas and renewable power – and not by environmental regulations.

Over the next decade, Duke plans to invest $11 billion in new natural gas and renewable power – and nothing in new coal-fired generation, said spokesman Rick Rhodes.

A Nov. 2 report by the Federal Reserve Bank of St. Louis – which has two of the largest coal producers in its district, Peabody Energy Corp and Arch Coal Inc – said coal-fired power plants “may eventually become obsolete.”

Coal companies believe they can survive despite the troubling market outlook.

Peabody expects a “modest number” of coal power plant retirements in the coming years, with some of that lost capacity shifting to remaining plants that will increase output, spokesman Vic Svec said. Arch spokeswoman Logan Bonacorsi offered a similar forecast.

Robert Murray, the chief executive of privately-held Murray Energy Corp – one of America’s biggest underground miners – said Trump could do more for the industry. The administration, Murray said, should end tax breaks for wind and solar power and reverse an EPA finding that carbon emissions endanger human health.

But Trump’s tax bill last week preserved most solar incentives, which have bi-partisan backing. And the EPA has so far steered clear of the so-called “endangerment finding” on emissions that is the basis of many fossil-fuel regulations, given the breadth of scientific evidence that would be needed to reverse it.

Murray Energy, meanwhile, announced on Oct. 31 it will buy a 30.5 percent stake in a coal-mining partnership in Utah called Canyon Consolidated Resources, LLC.

The deal might help the companies cut costs, but it’s unlikely to help workers: Murray said about 200 of 1,000 jobs in Utah could be lost.