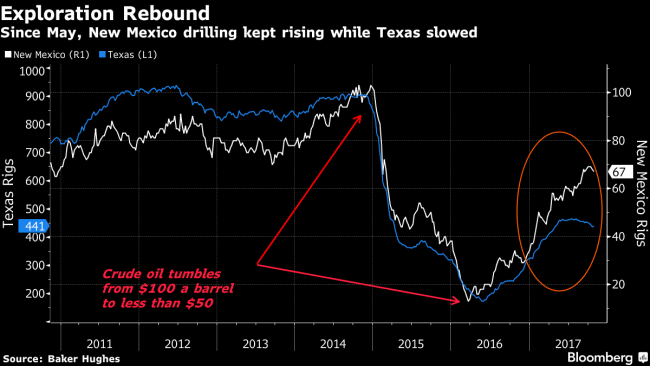 (Bloomberg) — Oil producers discouraged by the rising cost of accessing the vast deposits of the Permian Basin in Texas are sneaking into a geological back door, through neighboring New Mexico.

The state, which covers a smaller part of the oil-soaked shale formation, is the fourth-largest U.S. producer and luring industry giants including Exxon Mobil Corp (NYSE:)., Chevron Corp. (NYSE:), EOG Resources Inc (NYSE:). and Occidental Petroleum Corp (NYSE:). Their investments — while small compared with Texas — are increasing as activity in the rest of the Permian starts to slow down.

In just the past five months, drilling on the New Mexico side of the Permian expanded 25 percent to 75 rigs, while Texas contracted by 2 percent to 490, according to data compiled by Drilling Info Inc., an Austin-Texas based industry consultant. At the same time, the pipeline network is being expanded, which could mean more sustained growth in development and production.

New Mexico “may well be the next wave,” said Haag Sherman, chief executive officer at Tectonic Holdings LLC, a Houston-based investment firm overseeing $3.2 billion for clients. “If Exxon’s looking at it, that’s probably a good sign.”

Earlier this year, Irving, Texas-based Exxon, the world’s largest energy company by market value, jumped into New Mexico with a $5.6 billion acquisition of assets from the Bass family. Exxon said the quarter-million acres it bought will provide 20 years of drilling prospects.

Oil and gas companies have invested about $13 billion in New Mexico over the past couple of years through mergers and acquisitions, according to Steve Vierck, who runs economic development efforts in Lea County, one of the places seeing the biggest increase in drilling activity. The state produced a near-record 462,000 barrels a day in August, twice what it was pumping six years earlier, Energy Information Administration data show.

“When we talk about the Permian, we tend to think of the Permian as West Texas,” said Bernadette Johnson, vice president of market intelligence at Drilling Info. “We do tend to ignore New Mexico.”

To understand how fracking works, watch this video.

Like Texas, North Dakota, Pennsylvania and a few other states, New Mexico is benefiting from the development of hydraulic-fracturing technology and horizontal drilling for energy deposits once considered too costly to produce at a profit. They’ve provided access to billions of barrels and set off a revival in U.S. output, which compounded a global glut and sent prices down from more than $100 a barrel in 2014 to less than $60 now.

U.S. production has almost doubled in the past decade, largely because of fracking and horizontal wells. Texas alone produces about 3.4 million barrels a day, up from about 1.1 million in 2009 and more than all but three of the 14-member Organization of Petroleum Exporting Countries.

In the Permian, which is mostly in West Texas, the influx of energy companies has sparked bidding wars. Exploration rights in the basin that sold for $19,000 an acre on average in 2015 now fetch $30,000, according to data tracked by Drilling Info, even after a prolonged period of low crude prices. But in New Mexico, recent deals ranged from $18,000 to $24,000 an acre.

Still, there are six active drilling rigs in Texas for every one in New Mexico, according to Drilling Info. One reason the smaller state lags behind is a lack of pipelines and other oilfield infrastructure. But that’s beginning to change. Andeavor and Oryx Midstream Services II LLC are among the companies working on projects to expand New Mexico links with the rest of the Permian. Midland, Texas-based Oryx said construction of a 220-mile (354-kilometer) pipeline should be complete by the end of next year.

Once those networks are expanded, the infusion of cash will lead to an acceleration of drilling and production, Lea County’s Vierck said.

The hottest areas of activity in the state are in the far southeast. In Lea County, which saw its first oil drilling in the late 1920s, the arrival of some of the world’s biggest producers has caught the attention of longtime locals.

“They’ve made it very clear this area is where they’re investing heavily and plan on doing it for a long time,” said Sam Cobb, the 65-year-old mayor of Lea’s largest city, Hobbs.

Cobb, who also owns a food-processing company in town that makes products for Kraft Heinz Co., said he’s now competing with the oil industry for workers.

“But that’s good,” the mayor said. “I’ll always take the challenges of a good economy versus one of not.”

Even the rivalry with economic-development counterparts in Texas is getting a boost after vaulting past Oklahoma for oil output in the state, Vierck said.

“New Mexico is not that well known for energy production,” he said. “We’re definitely an important part of the Permian.”