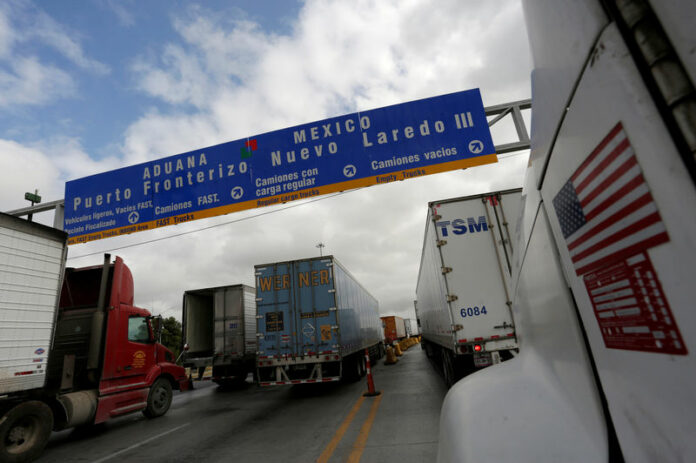 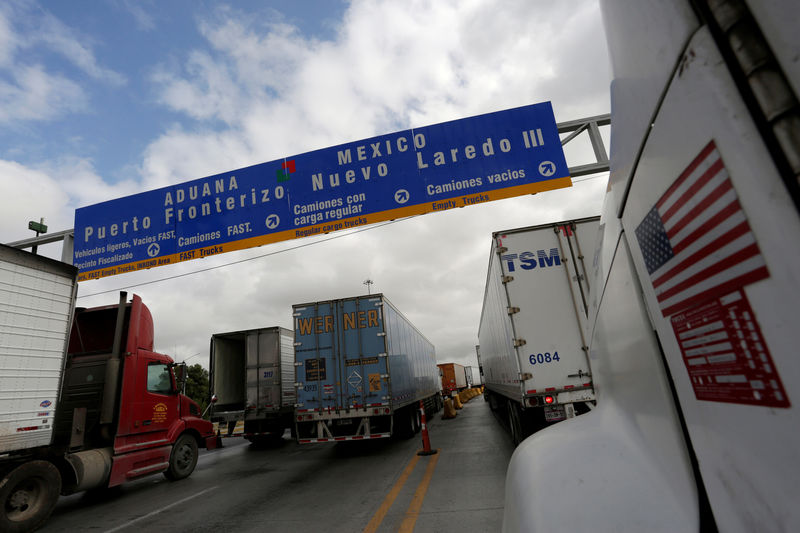 © Reuters. FILE PHOTO: Trucks wait in the queue for border customs control to cross into U.S. at the World Trade Bridge in Nuevo Laredo

By Dave Graham and David Lawder

MEXICO CITY/WASHINGTON (Reuters) – U.S., Canadian and Mexican negotiators hope to make modest progress in the next round of NAFTA trade talks as the White House focuses on pushing tax cuts through Congress, with little sign of compromise in sight on key sticking points.

A fifth round of negotiations to rework the North American Free Trade Agreement begins this week in Mexico City, weighed down by several contentious U.S. proposals that even some U.S. business leaders have labeled “poison pills” to the process.

From demands that the deal establish minimum U.S. limits in NAFTA auto content to scrapping a key dispute mechanism and adding an automatic expiry clause, the U.S. measures soured the mood in the previous round of talks in Virginia last month.

They have stirred fears that U.S. President Donald Trump could follow through on threats to dump NAFTA, creating a potential conflict with free trade proponents in the Republican Party whose support he wants for his planned tax cuts.

And with scant evidence that either side is prepared to give ground on the thorniest issues, narrowing differences on them this time is unlikely, Mexican and Canadian officials said.

“There’s been no movement on the tough stuff,” said Bosco de la Vega, head of Mexico’s National Agricultural Council (CNA), the main farming lobby, which is resisting another U.S. proposal that could restrict trade in seasonal foodstuffs.

However, there is still hope for progress on less divisive matters, officials said, pointing to signs of growing consensus on topics including telecommunications, e-commerce and small businesses, as well as some technical regulations.

Throughout, negotiators will be mindful of the debate in the U.S. Congress over the planned tax cuts, which have come under scrutiny for their potential impact on the federal deficit.

“All the political oxygen here has been absorbed by tax reform,” said Representative Frank Lucas of Oklahoma, a senior Republican on the House Agriculture Committee who is eager to keep NAFTA alive. “Everything is tax, 100 percent of the time.”

NAFTA working groups are due to begin meeting from Wednesday in Mexico to discuss issues ranging from textiles and services to labor and intellectual property. On Friday, talks will formally get underway through Nov. 21.

Should the U.S. side raise the so-called “poison pills,” Mexico and Canada do not intend to discuss them or propose compromises to dilute them, two officials from the countries said on condition of anonymity due to the sensitivity of the negotiations.

“We reject anything to do with national (auto) content,” said one Mexican official involved in the NAFTA discussions, calling the U.S. attitude to the process “short-sighted.”

U.S. business groups have spoken out against the national content proposal but many officials close to the talks believe that Trump is paying little heed to their concerns. That has fueled fears that whatever concessions Mexico and Canada might eventually make, it would “never be enough,” said one in Mexico.

Still, if Trump advances on the tax plan, it is more likely to help NAFTA talks than harm them, said the CNA’s de la Vega.

“What we know from our U.S. counterparts is that they’re saying, listen: we see that the future of (NAFTA talks) will depend on the success or failure of the tax reform. It will have a direct impact on NAFTA. How much? Who knows?” he said.

De la Vega estimated that roughly a fifth of the NAFTA negotiation was making progress, with the rest either mired in tricky details or proposals unacceptable to Mexico or Canada.