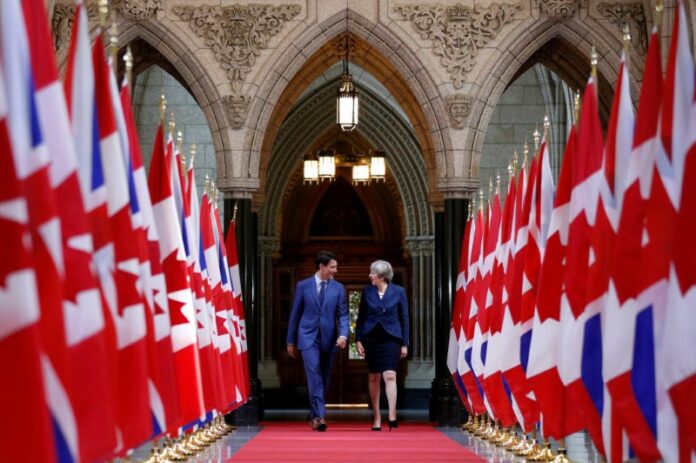 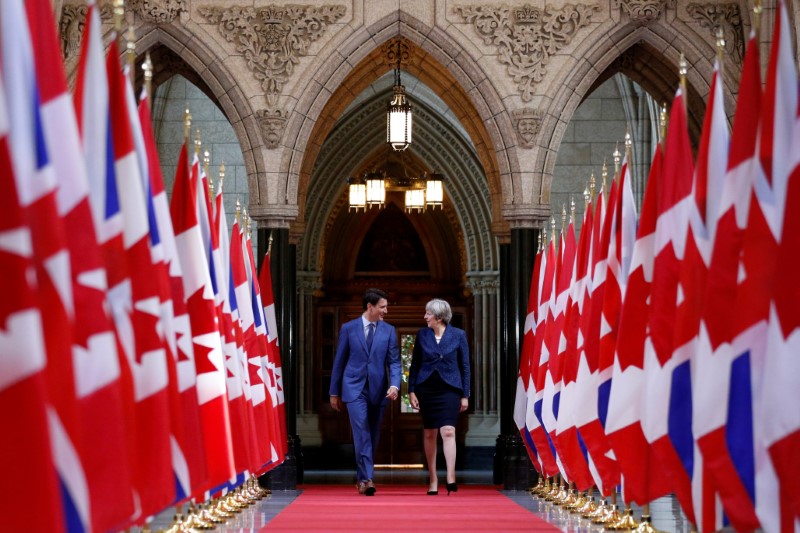 © Reuters. Canada’s PM Trudeau and Britain’s PM May walk in the Hall of Honour on Parliament Hill in Ottawa

By Jan Strupczewski and Gabriela Baczynska

BRUSSELS (Reuters) – The European Union is sizing up Britain for a post-Brexit free trade deal along the lines of one it agreed last year with Canada, people familiar with talks among national envoys on Tuesday told Reuters.

Chief negotiator Michel Barnier has long cited the Canadian example, and since EU leaders agreed last month to ready negotiations on the future relationship with the UK, the 27 states have looked closely at the Canadian trade deal as a model, given British demands, EU diplomats said.

Prime Minister Theresa May has ruled out staying in the EU single market, with its obligations of free migration, EU budget payments and obeying EU courts, and so diplomats concluded these terms rule out the models followed by Norway, and by Switzerland which has a web of bilateral agreements.

“From the red lines they have we know there are some things that are clearly off limits and that was clear today,” one of the people familiar with Wednesday’s roundtable discussion said.

“We are in free trade agreement territory. There is no doubt about that. Then you can call it what you want — Canada Plus or Minus, or Korea Plus or whatever, but that’s where we are.”

Like Canada, South Korea signed up to a far-reaching accord with Brussels on goods and services trade in 2011.

The UK economy is nearly twice the size of Canada’s, and British officials have said that their current alignment with EU standards and much closer trading links with the continent give them scope to seek an even deeper relationship some call “Canada Plus”.

For businesses worried about disruption to trade when Britain leaves the bloc in March 2019, a major concern is how quickly such a deal could be concluded. The envoys’ discussions showed there is still no willingness among the 27 to open trade talks with London until May meets conditions set by the Union.

At a summit a month ago, the prime minister was encouraged by EU leaders to see the next regular EU summit a month from now as the moment when trade negotiations could be launched, but EU diplomats who took part in talks on Tuesday said there was no sign yet that Britain was doing enough to make that happen.

A key sticking point is May’s refusal to give more detail on what parts of the EU budget Britain would contribute to for some years after Brexit. This “bill” the EU puts at tens of billions of euros. As a result, participants in the talks said, they have yet to start drafting guidelines for EU negotiators to follow.

Barnier has given London until the end of the month to make a new offer on the financial settlement, improve its terms for EU expatriates’ rights, and develop a plan for an open border with Ireland, if May is to secure what she wants on Dec. 14-15.

“The preparatory process for the guidelines starts later and the trigger will depend on sufficient progress on the Phase One issues,” said a second person involved in the discussions.

A third source said that member states were holding back on such detailed preparations to avoid sending the “wrong impression” to London that agreement was a foregone conclusion.

“Many member states said that as long as we don’t see progress there is no need to kill ourselves,” the official said.

Barnier said last week that if there is no deal on Phase One next month, the negotiations will simply continue in 2018.

Barnier has said that it could take about three years to agree a full free trade deal, giving just enough time if talks start in the new year and Britain agrees to a transition period from March 2019 to the end of 2020, during which it would effectively remain bound by EU rules while no longer participating in the setting of them.