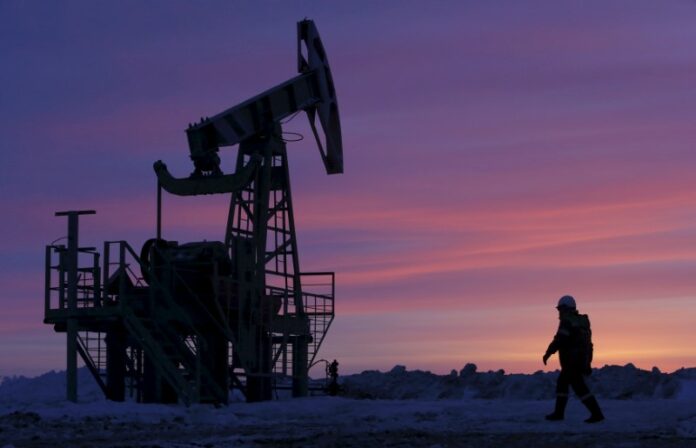 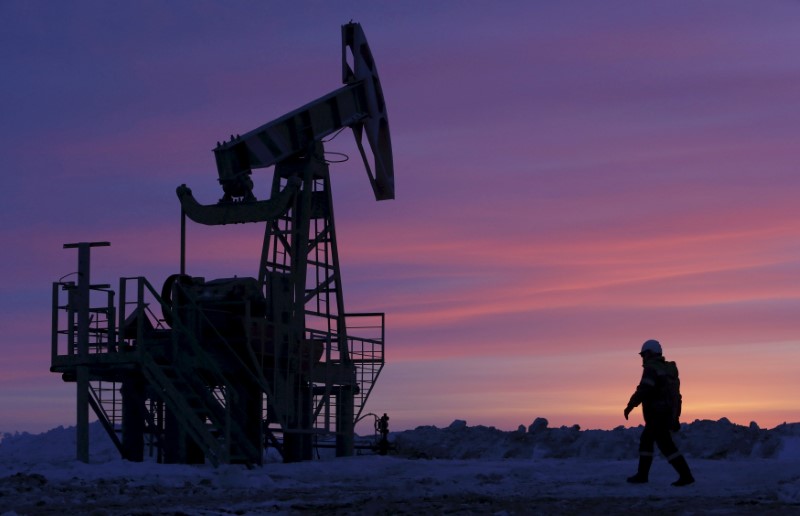 © Reuters. File photo of a worker walking past a pump jack on an oil field owned by Bashneft, Bashkortostan

The falls came after both crude benchmarks early last week hit highs last seen in 2015, but traders said the market had lost some momentum since then.

Traders said they were cautious on betting on further price rises.

This sentiment comes in part on the back of rising U.S. oil output

The U.S. government said on Monday U.S. shale production for December would rise for a 12th consecutive month, increasing by 80,000 bpd.

Fitch Ratings said in its 2018 oil outlook that it assumed 2018 “average oil prices will be broadly unchanged year-on-year and that the recent price recovery with Brent exceeding $60 per barrel may not be sustained”.

Despite the cautious sentiment, traders said oil prices would unlikely fall very far, largely due to ongoing supply restrictions led by the Organization of the Petroleum Exporting Countries (OPEC) and Russia, which have contributed to a reduction in excess supplies.

OPEC also raised its oil demand forecast, saying the world would need 33.42 million barrels per day (bpd) of OPEC crude next year, up 360,000 bpd from its previous forecast and marking the fourth consecutive monthly increase in the outlook since July.

OPEC is due to meet on Nov. 30 to discuss further output policy. The group is expected to agree an extension of the cuts beyond their current expiry date in March 2018.

Looking further out, the International Energy Agency said on Tuesday there will be 50 million electric vehicles (EVs) on the road by 2025 and 300 million by 2040, from around 2 million now. This is expected to cut 2.5 million bpd, or about 2 percent, off global oil demand by that time.

Still, the IEA’s “New Policies Scenario”, based on existing legislation and policy intentions, expects oil prices to rise towards $83 a barrel by the mid-2020s.