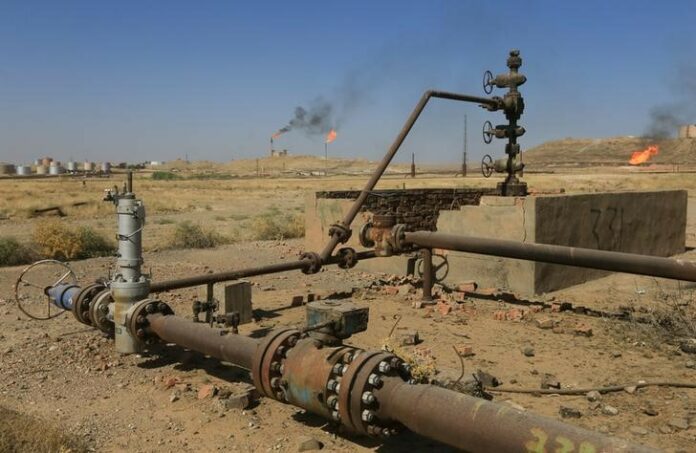 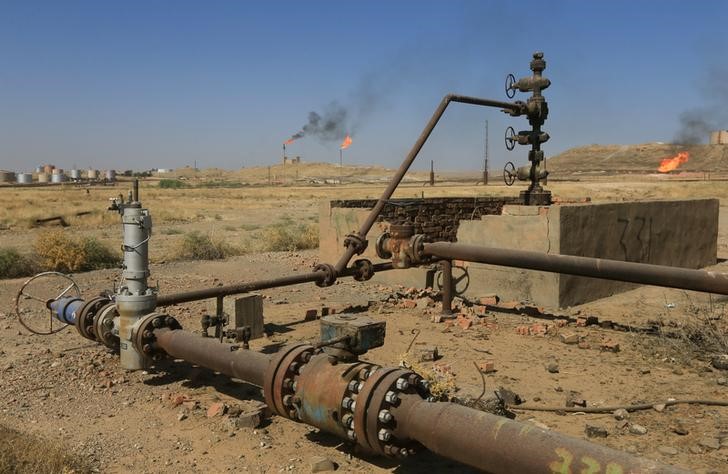 © Reuters. An oil field is seen in Kirkuk

BAGHDAD/LONDON (Reuters) – After helping Iraq stifle a Kurdish push for independence, Iran is now positioning itself to take control of oil exports from the region’s giant Kirkuk field, with the first deliveries expected within days, officials and trading sources said.

In the weeks since September’s failed Kurdish independence referendum, Iraq has agreed for the first time to divert crude from Kirkuk province, which it retook from the Kurds, to Iran, where it will supply a refinery in the city of Kermanshah.

Iran is locked in a proxy war with its regional rival and U.S. ally, Saudi Arabia. As well as Iraq, it has been extending its influence in Syria, Yemen and Lebanon, raising increasing concerns in Washington and Riyadh.

Under the new arrangement, the first oil will be trucked across the border in the coming days. Initially Iran will receive 15,000 barrels per day worth nearly $1 million, rising gradually to 60,000 bpd, according to Iraqi officials and trading sources.

Baghdad and Tehran have also revived a project to build a pipeline to carry oil from Iraq’s Kirkuk fields to central Iran and onwards for export from the Gulf.

Hamid Hosseini, the Iranian secretary-general of the Iran-Iraq Chamber of Commerce, said Iran want to build a pipeline that can take as much as 650,000 bpd of Kurdish oil for its domestic refineries and for exports.

The pipeline would replace existing export routes for crude from northern Iraq via Turkey and the Mediterranean and would be a blow to Ankara’s hopes of becoming an energy hub for Europe.

It would also be evidence of a U.S. failure to prevent a rapprochement between its ally Iraq and one of its biggest political foes, Iran, which is rapidly regaining influence in the Middle East.

That is in part due to general Qassem Soleimani, commander of the Quds force, the international branch of the Revolutionary Guards, which is also taking a keen interest in Iran’s oil business in Iraq.

Soleimani visited Iraqi Kurdistan in September to warn the region against holding an independence vote. He was also involved in the Iraqi army’s recapture of Kirkuk.

“In Iraq, Iranian forces are working to sow discord as we recently saw in Kirkuk, where the presence of Quds force commander, Qassem Soleimani, exacerbated tensions among the Kurds and the government in Baghdad,” U.S. Senator John McCain said in Washington last week.

“The Kurdish dream of being a big oil exporter is in tatters,” said a source close to the government in Erbil, who predicted that “Iran will be king of the game”.

The Kurds’ bid for independence angered Turkey and Iran, which both have large Kurdish populations and condemned the referendum as destabilizing the region. The United States also called on Kurdistan to scrap the vote.

But it was probably internal Kurdish divisions which doomed the referendum to failure, local political sources believe. Oil was at the heart of this dispute.

The Kirkuk fields were controlled by Iraq’s state oil firm SOMO before being taken over by Kurdish forces in 2014, when the Iraqi army retreated in the face of attacks by Islamic state.

The Patriotic Union of Kurdistan party (PUK), in Sulaimaniya, then accused the ruling Kurdistan Democratic Party (KDP) party of then President Massoud Barzani, based in the capital Erbil, of not sharing the oil wealth. The PUK wanted to export oil from Kirkuk to Iran.

“We tried to make Barzani accept joint management between Erbil and Sulaimaniya over the fields but he strongly opposed it,” said Sherzad Yaba, a political adviser close to the PUK.

“To put an end to the illegitimate control of the KDP over Kirkuk oil, senior members from the PUK contacted both Baghdad and Tehran and encouraged the Iranians to build a pipeline to export Kirkuk crude through Bandar Abbas port,” said Yaba.

The project lay dormant even though Iraqi oil minister Jabar al-Luaibi and his Iranian counterpart Bijal Zanganeh signed a memorandum on the project in February.

After the referendum, the KDP accused the PUK of striking a deal with Iran to withdraw from Kirkuk, which the PUK denies.

The recapture of Kirkuk was coordinated with Soleimani and left Iraqi government troops in control of half of all Kurdish oil output.

As Kurdish engineers fled the fields, output from Kirkuk was suspended and has remained shut for the past five weeks as Baghdad and Erbil argue over the revenue split.

With output of over 300,000 bpd suspended since mid-October, losses are approaching $1 billion, according to Kurdish industry sources.

To stop the losses, Iraq and the PUK resumed talks with Iran, according to Iraqi and Kurdish officials.

Officials from Iraq’s and Iran’s state oil firms, SOMO and NICO, met last month to iron out details of oil sales to the Kermanshah refinery, the acting chief of SOMO, Alaa al-Yasiri, said.

He also said active discussions were taking place about the pipeline project.

Even though discussions between Baghdad and Tehran have been conducted between oil ministry officials and the Chamber of Commerce, the Revolutionary Guards are poised to step in.

“Any oil transaction between Iran and Iraq should be approved by the Revolutionary Guards, not the oil ministry.” said Reza Mostafavi Tabatabaei, president of London-based ENEXD, a firm involved in the energy equipment business in the Middle East.

Those dealings are overseen by the desk responsible for Iran’s investments in Iraq at the president’s office and are run by the Revolutionary Guards.

The pipeline project will be the Revolutionary Guards’ reward to the Kurds for helping with the recapture of Kirkuk, said Tabatabaei.