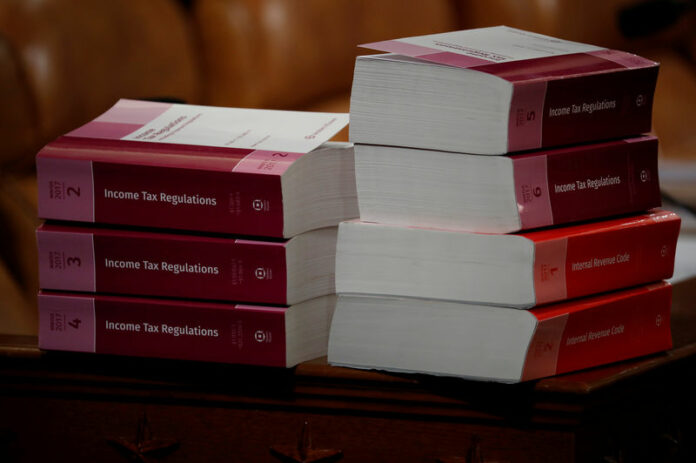 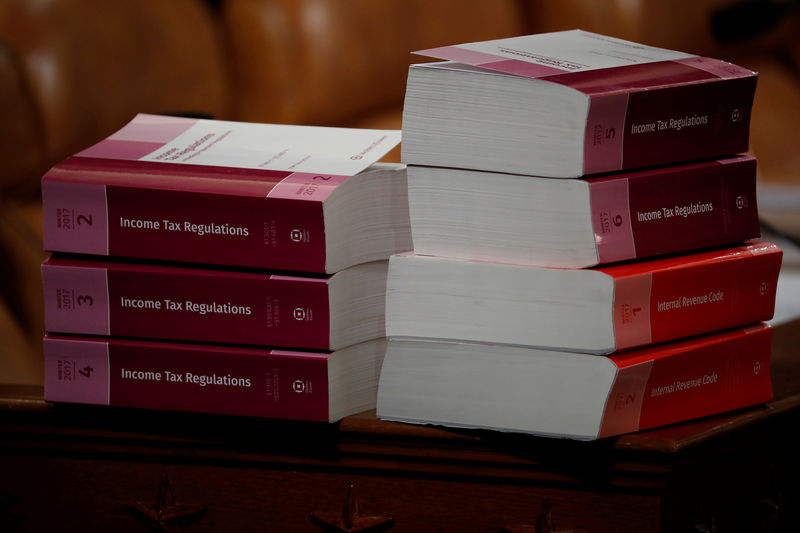 © Reuters. Tax documents are seen prior to a House Ways and Means Committee markup of the Republican Tax Reform legislation on Capitol Hill in Washington

WASHINGTON (Reuters) – Republican U.S. Senator Rand Paul said on Tuesday he will seek to abolish a crucial Obamacare provision as part of sweeping tax cut legislation in a move that could complicate President Donald Trump’s push for swift congressional passage.

Paul, an iconoclast who often defies the party’s Senate leadership, said he planned to offer an amendment to get rid of an Obamacare requirement known as the individual mandate, which requires Americans to pay a penalty if they do not obtain health insurance.

The Senate Finance Committee on Tuesday continued work on its Republican proposal, while the full House of Representatives prepared to vote on a rival version as early as Thursday.

While the House and Senate tax plans differ in some ways, they both call for slashing tax rates on businesses, reshaping how the United States taxes multinational corporations and repealing or reducing taxes on high-income Americans.

Neither version contains language repealing the individual mandate, an Obamacare provision conservatives have long targeted for elimination. Trump also has pushed to repeal the Obamacare mandate in the tax legislation, including on Twitter on Monday.

Goldman Sachs (NYSE:) Economic Research said it had revised its estimate of the odds that tax legislation will become law by early 2018 to 80 percent from 65 percent, though “there are a number of issues that could still slow it down, or stop it altogether.”

The inclusion of an individual mandate repeal could test Republican unity and potentially derail tax legislation. Trump is still seeking his first major legislative victory since taking office in January, even though his party controls Congress and the White House. Congress this year failed to pass legislation to repeal and replace Obamacare, formally called the Affordable Care Act.

Republicans hold a razor-thin 52-48 majority in the Senate. If Democrats remain united in opposition, Republican could not afford to lose more than three senators in their ranks to secure passage.

Paul also said he would seek to align the Senate bill, which fully repeals the existing federal deduction for state and local taxes (SALT), to match language in the rival House bill that only partially repeals the deduction.

He said on Twitter his amendment would “fix a problem in the Senate bill where many taxpayers would see a tax increase because of the loss of state and local deductions,” and help ensure that the House and Senate versions match on this key provision.

While Paul favors tax cuts, it already was not a given that he would support the Republican legislation.

The nonpartisan Congressional Budget Office said last week repealing the individual mandate would increase the number of Americans without health insurance by 13 million by 2027. The CBO also said eliminating it would raise average insurance premiums on policies sold in the Obamacare marketplaces by about 10 percent annually over the next decade and would lower the deficit by $338 billion over the next decade.

Congressional Republicans aim to pass the tax cut legislation by the end of the year. Trump, who promised deep tax cuts as a candidate and as president, returns to Washington on Tuesday from a trip to Asia.

The Senate Finance Committee is debating its version all week before heading home for the Nov. 23 U.S. Thanksgiving holiday. Once the lawmakers return, a Senate vote is expected.

Republicans will then have a matter of days to resolve differences between the two tax plans, including on the deduction for state and local taxes, the timing of a corporate tax rate cut and whether to phase out an estate tax on inheritances.

Finance Committee Democrats zeroed in on the proposed elimination of the SALT deduction as one of many ways in which the Republican legislation would benefit corporations and the wealthy at the expense of middle-class taxpayers.

The repeal of a deduction for SALT payments would disproportionately hit individuals in high-tax states such as New York, New Jersey, Connecticut and California. Tax negotiators in the House arrived at a compromise to preserve the deduction for property-tax payments, capped at $10,000 per year, but not income-tax payments.

Democratic Senator Ben Cardin of Maryland said that about half of taxpayers in his state used the deduction, and questioned why businesses would still be able to deduct property and other local tax payments under the Republican proposal, but not individuals.

The Senate proposal, like its companion in the House, would add about $1.5 trillion to the federal deficit over a decade, and that is another issue that has prompted concern among Republicans, particularly in the Senate.