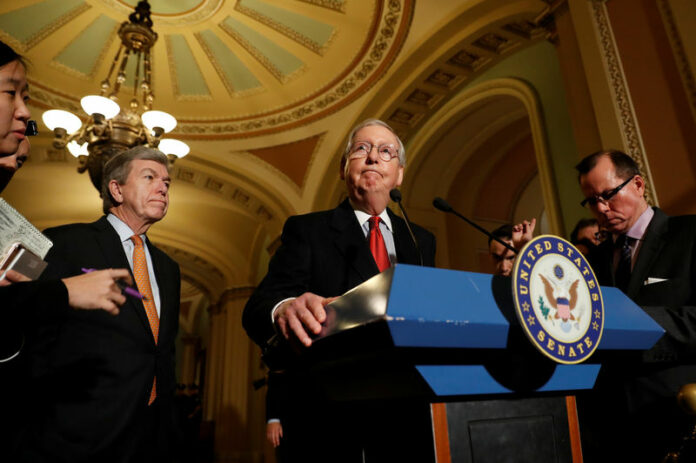 WASHINGTON (Reuters) – Majority Leader Mitch McConnell and fellow Senate Republicans said on Tuesday their tax-cut plan likely will be amended to include a repeal of an Obamacare rule disliked by conservatives that requires Americans to have health insurance coverage or pay a penalty.

In a move that would raise the stakes in a tax debate that is crucial to Republicans’ 2018 political prospects and potentially make the path toward passage more difficult, McConnell told reporters, “We’re optimistic that inserting the individual mandate repeal would be helpful.”

President Donald Trump, who has yet to score a major legislative victory since taking office in January even though his party controls Congress, said in a tweet on Monday the mandate repeal should be added to the plan.

The Senate Finance Committee, which had been debating the tax bill, abruptly adjourned sooner than expected on Tuesday afternoon as Republicans weighed including the mandate repeal.

No final decision was made at the Senate Republicans’ weekly policy luncheon in the Capitol, Senator Susan Collins afterward told reporters. She played a key role in July’s collapse of a years-long push by her fellow Republicans to gut Obamacare.

“I personally think that it complicates tax reform to put the repeal of the individual mandate in there,” Collins said.

Asked if she would back the tax bill if a mandate repeal were added, she said, “I’m going to wait and see.”

Senator John McCain, who was also central to his party’s failed Obamacare repeal earlier this year, was non-committal on putting the mandate repeal in the tax plan, as well.

“I want to see the whole bill before I decide,” McCain said. “I don’t know if it makes it easier or harder.”

The Senate and the House of Representatives are developing competing tax-cut packages that financial markets have been monitoring closely. Stocks have rallied for months, partly on hopes of business tax cuts.

Neither version at the moment includes repealing the mandate.

Adding it would test Republican unity and likely cement Democratic opposition, raising the political risks for the tax revamp, which Republicans are eager to complete so they can face voters next year with at least one major legislative achievement.

Republicans hold a razor-thin 52-48 majority in the Senate. If Democrats remain united in opposition, Republicans could afford to lose no more than two senators from within their own ranks and still secure passage of tax legislation.

The nonpartisan Congressional Budget Office said last week that ending the individual mandate would increase the number of Americans without health insurance by 13 million by 2027, raise average insurance policy premiums in the Obamacare marketplaces by about 10 percent annually over the next decade and lower the deficit by $338 billion over the same period.

Congressional Republicans are aiming to pass tax legislation by the end of the year.