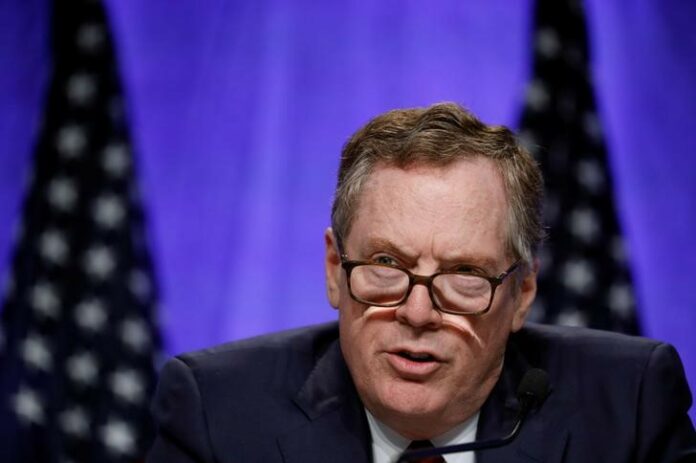 Trump’s trade chief gets his chance to confront WTO nemesis 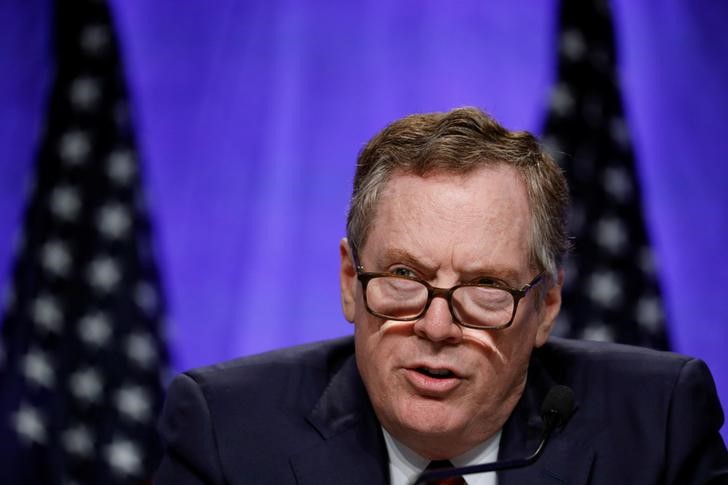 By David Lawder and Tom Miles

WASHINGTON/GENEVA (Reuters) – After railing against the World Trade Organization for years, U.S. President Donald Trump’s trade chief will get a chance to stare down his WTO counterparts over Trump’s “America First” trade agenda.

The question is whether U.S. Trade Representative Robert Lighthizer will try to work to build consensus within the organization or weaken it through neglect at the WTO’s 11th Ministerial Conference in Buenos Aires, which opens on Dec. 10.

Lighthizer has already signaled that he doesn’t want major new agreements at the meeting, and U.S. officials have blocked the WTO’s efforts to draft a statement of unity over the “centrality” of the global trading system and the need to aid development.

The former steel industry trade lawyer has denied wanting to undermine the body, despite voicing criticism over the past decade of WTO rulings against U.S. trade actions. In a 2010 testimony to a congressional China security review panel, he advocated that the United States could “derogate”, or partially ignore, some WTO decisions to force change in the trading system.

“We are pursuing a successful ministerial in Buenos Aires this December that reinvigorates the WTO,” Lighthizer told U.S. senators in June. “We do not advocate a meeting that seeks major deliverables or significant negotiated outcomes.”

Lighthizer in September called for reforms to a “deficient” WTO dispute settlement system that he says is too interpretive, creating “indefensible” new obligations on the United States.

And he has warned that any WTO ruling that grants “market economy status” to China would be “cataclysmic” for the WTO. The issue, now in the body’s dispute settlement system, would severely weaken U.S. and EU trade defenses against subsidized Chinese goods.

Trade analysts interpret this statement as suggesting that Washington would simply ignore a ruling in favor of Beijing, weakening the WTO and inviting other countries to follow suit.

In a previous stint at USTR in the 1980s before the WTO’s birth, Lighthizer relied on powerful U.S. trade laws and tariff threats to pressure Japan into voluntary export restraints.

He has turned to those same laws to try to rein in China’s massive U.S. trade surpluses, including launching a Section 301 investigation into China’s intellectual property practices that could lead to retaliatory trade restrictions. It is unclear whether those laws can pass muster with the WTO.

Trade diplomats say that the U.S. trade stance has overshadowed preparations for the four-day biennial conference of ministers representing the WTO’s 164 members.

This time around, nobody is pretending that the group will reach ambitious deals on agenda items such as cutting subsidies for fisheries and agriculture, but ministers could still cobble together lesser agreements in the face of growing pressure on trade and multilateralism.

“If it’s a modest result it will be a successful ministerial conference,” said Arancha Gonzalez, head of the International Trade Centre in Geneva, a joint U.N.-WTO agency.

Although the United States has not threatened to leave the WTO, trade experts say that Washington is threatening the group’s authority by vetoing judicial appointments, undermining one of the WTO’s core functions: dispute settlement.

“President Trump has repeatedly voiced his utter disdain for the WTO, and Lighthizer is conducting a stealth war to undermine the WTO by undermining the independence and thus the impartiality of WTO judges,” said James Bacchus, a former WTO chief appellate judge who is now a global affairs professor at the University of Central Florida.

European Union Trade Commissioner Cecilia Malmstrom told reporters in Brussels that many WTO members are worried that the U.S. stance “risks blocking the whole functioning of something that has been working well.”

Many trade analysts say that the WTO dispute system has generally worked well for the United States, which tends to win most of the cases it argues. On Wednesday, the WTO ruled against Indonesia’s challenge to U.S. anti-dumping and anti-subsidy duties on Indonesian coated paper.