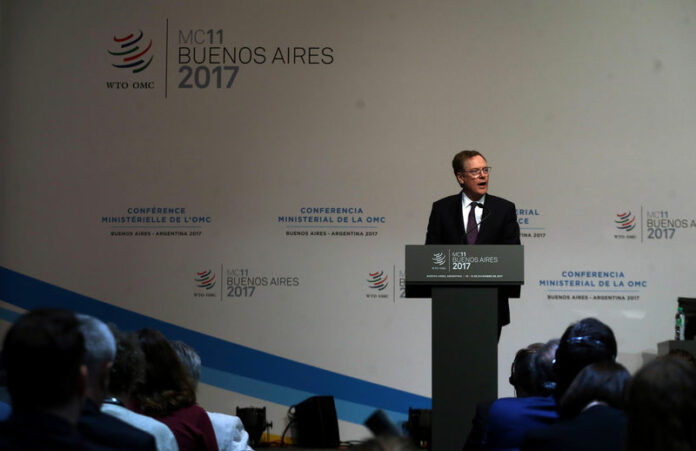 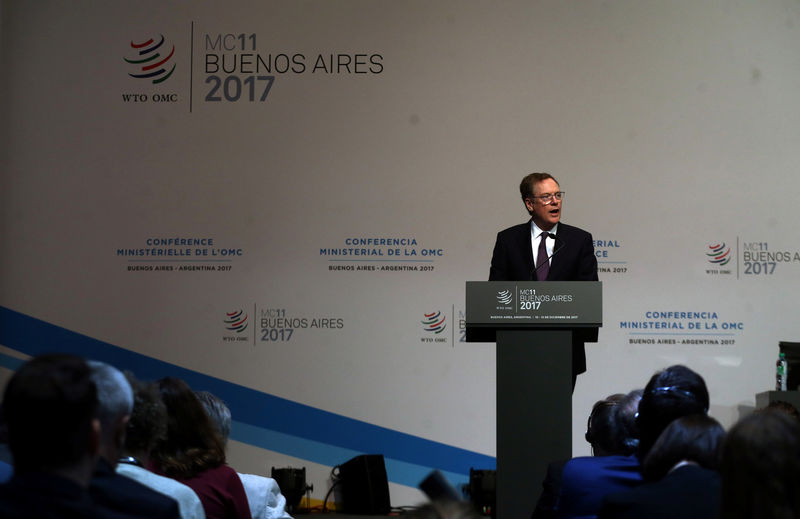 BUENOS AIRES (Reuters) – U.S. President Donald Trump’s trade chief said on Monday that the World Trade Organization (WTO) is losing its focus on trade negotiations in favor of litigation, and was going too easy on wealthier developing countries such as China.

U.S. Trade Representative Robert Lighthizer, who has said he does not want major agreements out of the meeting, voiced concern that the WTO was becoming a litigation-centered organization.

“Too often members seem to believe they can gain concessions through lawsuits that they could never get at the negotiating table,” he said. “We have to ask ourselves whether this is good for the institution and whether the current litigation structure makes sense.”

Too many countries were not following WTO rules, he complained, and too many wealthier members had been given unfair exemptions as developing countries.

“We need to clarify our understanding of development within the WTO. We cannot sustain a situation in which new rules can only apply to a few and that others will be given a pass in the name of self-proclaimed development status,” Lighthizer told the conference’s opening session.

He said five of the six richest countries claim developing country status at the WTO, without providing evidence to back up the assertion. Of the countries with the six largest economies by Gross Domestic Product, according to the World Bank, only China claims developing market status.

Ahead of the meeting, the United States blocked efforts to draft a joint statement emphasizing the “centrality” of the global trade system and the need to aid development. Its opposition has raised concerns that the WTO will not be able to accomplish even modest goals, such as addressing fishing and agricultural subsidies, at the conference.

“We need to have a clear objective in mind,” European Trade Commissioner Cecilia Malmstrom said. “For the European Union, this is clear: to preserve and to strengthen the rules-based multilateral trading system.”

Trump has indicated his preference for bilateral deals over the multilateral system embodied by the WTO. The United States has vetoed new judges for trade disputes, pushing the organization into a crisis.

On Monday, Lighthizer said it was impossible to negotiate new rules when many of the current ones were not being followed, and added that too many members viewed exemptions from WTO rules as a path to faster growth.

In a thinly veiled swipe at China’s trade practices, Lighthizer said the United States was leading negotiations to “correct the sad performance of many members in notification and transparency.”

The United States is backing the EU in its resistance to recognizing China as a market economy, arguing the government unfairly intervenes in the economy. The case, currently before the WTO, could lead to dramatically lower tariffs on imports of Chinese goods.

Chinese Commerce Minister Zhong Shan said on Monday that while trade protection was rising, no country would be able to succeed in isolation and that WTO rules were critical to protecting globalization.

“Let us join hands and take real action to uphold the authority and efficacy of the WTO,” Zhong said.