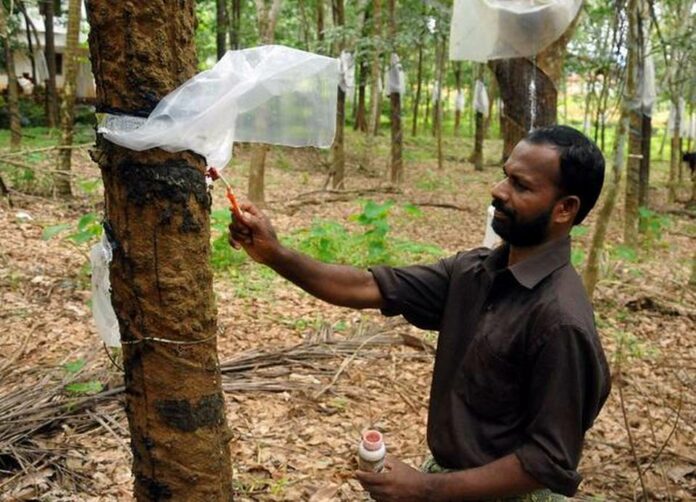 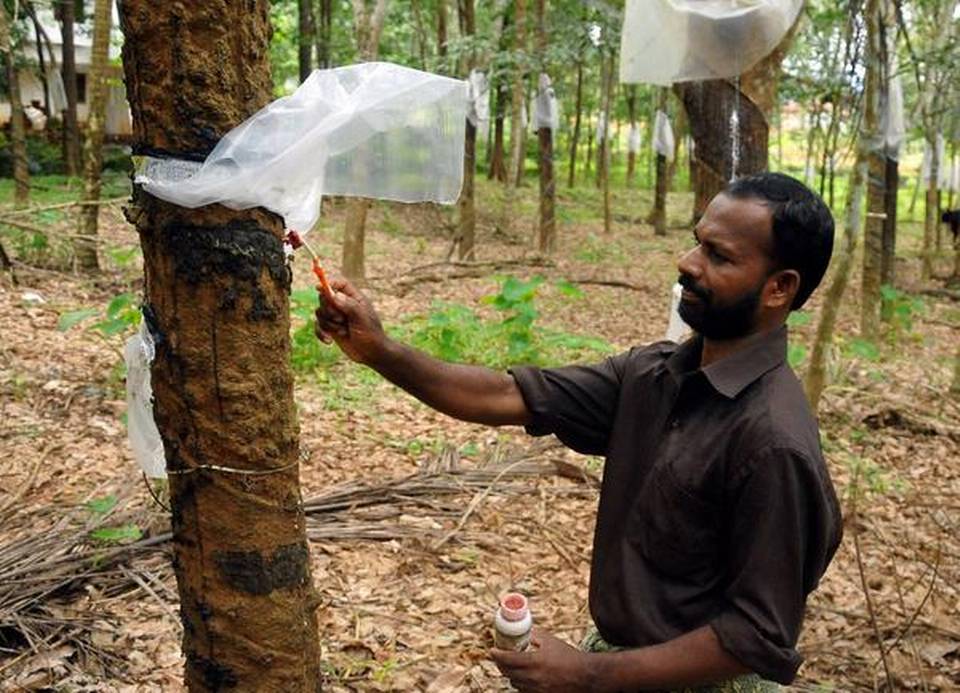 Rubber growers say they are facing crisis because of declining prices of raw rubber. Here is a farmer at Kodenchery applying a chemical stimulant on rubber trees to increase the production.   | Photo Credit: S_RAMESHKURUP

The distribution of benefits under the Rubber Production Incentive Scheme of the State government to support farmers during the price fall of the commodity has come to a standstill, affecting hundreds of farmers in the rural areas of Kozhikode. The farmers say they have been waiting for the online transfer of fund for more than nine months now after submitting the bills.

The Rubber Producers’ Societies (RPS), functioning under the regional office of the Rubber Board in various parts of the district, are clueless on the possibility of resuming the fund distribution. Farmer organisation leaders say small-scale and lower income group of farmers are the worst-hit with the poor attention of the government on the issue.

The fourth grade Ribbed Smoke Sheet (RSS), which is produced mainly by the rubber growers across the State, is now having only ₹123 a kg in the market.

As per the subsidy schemes announced by the government, the supportive price to tide over the price fall comes around ₹150. At least ₹25 should be paid for a kilogram as subsidy to compensate their loss.

“At least ₹50,000 will have to be credited into my account if the government is processing my already submitted bills through the RPS. Though December is comparatively a high-yielding season, most of the farmers are not getting the expected quantity of latex, which will definitely push them into crisis in the days to come,” says Johnson Kulathingal, a farmer from Koombara.

He points out that the government is yet to come up with any communication on their plan to release the pending amount.

Joy Kannanchira, chairman of ‘We Farm’ hillside farmers’ club, says only a few instalments have been processed by the Left Democratic Front-led government though the farmers have raised the issue several times. “We are planning to launch a mass protest after meeting the Chief Minister with farmers’ petitions,” he adds.

Large-scale farmers say they are not even in a situation to hire labours for tapping and latex collection works as the price fall continues to be a big concern. Leaders of the Indian Farmers Movement and Karshaka Congress point out that many still continue in the field as there is no other option for a steady source of income for survival.