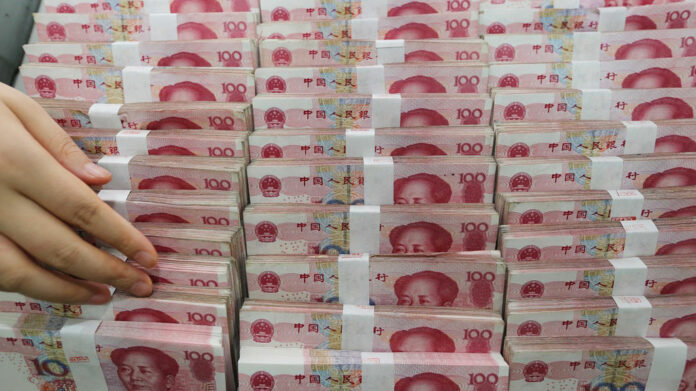 SHANGHAI: China’s yuan firmed slightly against the dollar on Wednesday as domestic market participants trimmed greenback positions ahead of the US Federal Reserve’s policy meeting at which it’s expected to raise interest rates.

While the greenback stood near a four-week high against a basket of currencies on Wednesday after strong US wholesale inflation data, traders in China say they anticipate a fall in the dollar index after an expected Fed hike, which has been priced in by market participants.

Wednesday’s official midpoint was fixed at the weakest level in four weeks to reflect the strength in the dollar overnight, but traders said dollar’s broad impact has had little impact on the spot market.

The onshore yuan opened at 6.6245 per dollar and was changing hands at 6.6183 at midday, 32 pips firmer than the previous late session close but 0.10 percent weaker than the midpoint.

Traders said the market largely shrugged off a rise in the dollar overnight. A Shanghai-based trader at a foreign bank said corporate flow was mainly dominated by seasonal dollar purchases as some companies built up dollar positions for mid-month financing needs.

However, the trader added dollars were sold in proprietary trade ahead of the Fed announcement.

The yuan has gained around 5 percent against the greenback so far this year, following a loss of about 6.5 percent in 2016, which was the biggest annual decline since 1994.

Market watchers said while one-way bets in the Chinese currency in either direction are fewer this year, some expect the yuan to depreciate modestly next year.

“Taking into account slowing China growth momentum amid deleveraging and the Fed’s gradual rate hike pace, we look for modest CNH depreciation next year, with the target of 6.85 at 2018-end,” Ken Cheung, senior Asian FX strategist at Mizuho Bank in Hong Kong wrote in a note.

The Thomson Reuters/HKEX Global CNH index, which tracks the offshore yuan against a basket of currencies on a daily basis, stood at 95.42, firmer than the previous day’s 95.36.

The offshore yuan was trading 0.08 percent weaker than the onshore spot at 6.6239 per dollar.