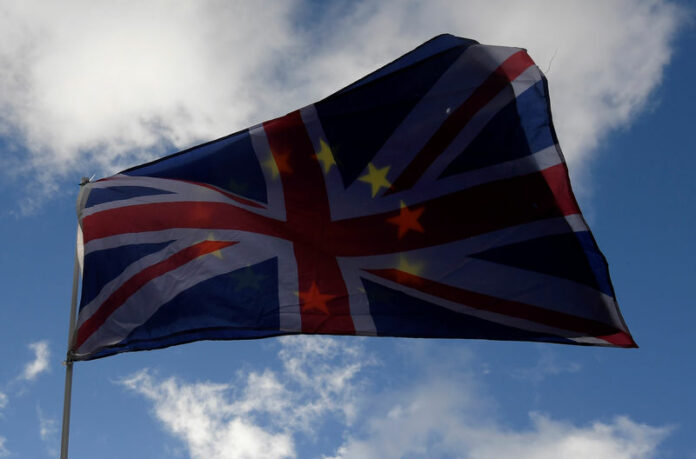 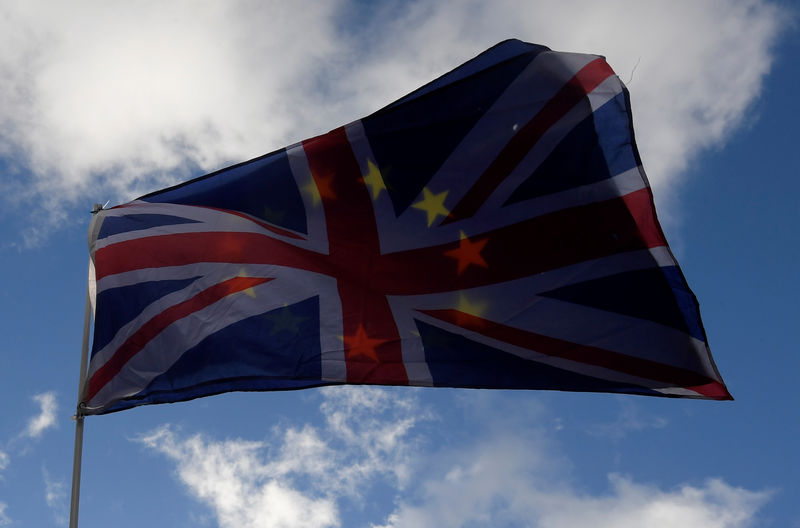 © Reuters. An EU flag and Union flag are seen flying together during an anti-Brexit protest near the Houses of Parliament in London

LONDON, (Reuters) – Last week’s breakthrough in Brexit talks has reduced the risk of Britain leaving the European Union in a disorderly way and may boost economic confidence, the Bank of England said on Thursday after it left interest rates unchanged.

BoE policymakers voted unanimously to keep rates at 0.5 percent as expected, a month after raising them for the first time in more than a decade.

Domestic economic data suggested the economy might be slowing slightly into the end of the year, but finance minister Philip Hammond’s annual budget in November should modestly boost growth over the next few years, and Brexit talks appeared to be moving forward, the BoE said.

Prime Minister Theresa May secured agreement from the European Commission last week that Britain had made sufficient progress in preliminary talks to move on to negotiating a transition agreement and a longer-term trade deal.

“This would reduce the likelihood of a disorderly exit, and was likely to support household and corporate confidence,” the BoE said, adding that it would consider progress on Brexit more closely when it updates its forecasts in February.

May is in Brussels on Thursday to get EU national governments to sign off on last week’s deal.

BoE Governor Mark Carney has previously faced criticism from supporters of Brexit for focusing on the economic risks of leaving the EU. Carney says the BoE’s mandate requires it to highlight publicly any risks it sees to the economy.

The BoE stuck to its view from last month that interest rates were likely to need to rise gradually.

“The committee remained of the view that, were the economy to follow the path expected in the November Inflation Report, further modest increases in Bank Rate would be warranted over the next few years,” the BoE said.

The BoE decision comes the day after the U.S. Federal Reserve raised interest rates for a third time this year, and shortly before the European Central Bank is due to make a statement on monetary policy.

Economists polled by Reuters had mostly expected a 9-0 vote in favor of leaving policy unchanged from the Monetary Policy Committee after last month’s rate rise. The BoE said this marked the start of a very gradual tightening cycle as the economy comes close to running at full capacity.

Inflation hit its highest level in nearly six years in November at 3.1 percent, and the jobless rate remains at the lowest since 1975, even though the outlook for growth is soft.

Last month the BoE said it expected the economy to grow by 1.6 percent next year, unchanged from what it expects for 2017 and somewhat faster than the government and most economists polled by Reuters expect.

The “very gradual” pace of tightening signaled by the BoE last month reflects both uncertainty about the economic impact of ongoing talks to leave the EU, as well as weak underlying inflation pressures that belie the high headline rate.

Consumer demand has faltered this year mostly due to rising inflation – not Brexit worries – so last week’s agreement removed a downside risk, rather than pointing to stronger growth, economists have said.

Figures overnight pointed to the weakest housing market since 2013 but retail sales data earlier on Thursday were unexpectedly strong, as shoppers pounced on Black Friday bargains.

The BoE said that inflation was now close to its peak and reiterated its view that above-target price growth is almost all due to sterling’s fall after June 2016’s Brexit vote. It expects inflation to fall slowly next year.

Wage growth – which many BoE policymakers view as a good guide to medium-term inflation pressures – remains slow, with regular pay in the three months to October up just 2.3 percent on a year earlier.

However, the BoE said that this was in line with expectations, unlike in previous years when it had disappointed, and that slack in the economy was being steadily eroded.