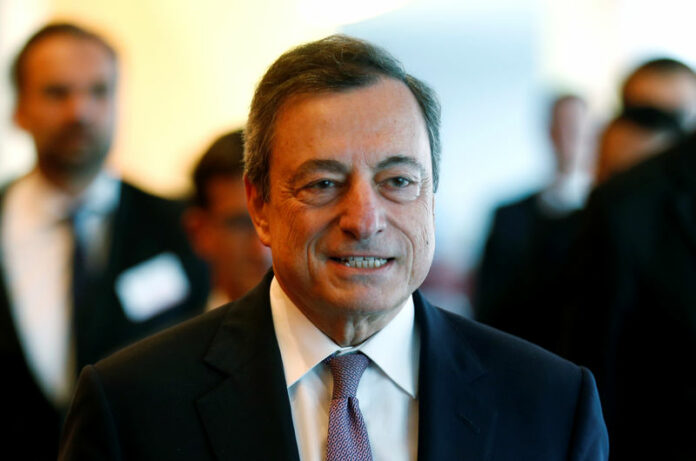 Investing.com – After the European Central Bank (ECB) announced its widely anticipated decision to hold interest rates steady and proceed with its already announced tapering of its monthly asset purchases (APP) in January, ECB chief gave an upbeat vision of the euro zone economy but insisted that further quantitative easing was needed in order to reach the ECB inflation target.

In the released 45 minutes ahead of Draghi’s appearance, the ECB left its unchanged at 0.0% and confirmed, as previously announced, that it will reduce monthly asset purchases from the current €60 billion ($71 billion) to €30 billion ($35.5 billion) and will extend those purchases to “the end of September 2018, or beyond, if necessary, and in any case until the Governing Council sees a sustained adjustment in the path of inflation consistent with its inflation aim”.

Draghi reiterated these points in his introductory remarks and moved on to explain that these measures were still necessary to support economic improvement and return inflation to the ECB’s target of below, but close to, 2%.

“Domestic price pressures remain muted overall and have yet to show convincing signs of a sustained upward trend,” he explained.

However, Draghi insisted that the “strong cyclical momentum and the significant reduction of economic slack” gave grounds for a greater confidence that inflation will return to target over time.

“On the one hand, the strong cyclical momentum, underpinned by continued positive developments in sentiment indicators, could lead to further positive growth surprises in the near term,” he stated.

“On the other hand, downside risks continue to relate primarily to global factors and developments in foreign exchange markets,” Draghi added.

Draghi tells governments to get to work… again

Unsurprisingly, Draghi once again insisted on the need for the implementation of structural reforms in all euro area countries to be “substantially stepped up” to increase resilience, reduce structural unemployment and boost euro area productivity and growth potential.

He also noted that the “increasingly solid and broad-based expansion” strengthened the case for rebuilding fiscal buffers, especially in euro states with high debt.

“A full, transparent and consistent implementation of the Stability and Growth Pact and of the macroeconomic imbalance procedure over time and across countries remains essential to increase the resilience of the euro area economy. Strengthening Economic and Monetary Union remains a priority,” Draghi concluded.

In the question and answer period, the ECB president emphasized the upbeat economic outlook. “We are certainly more confident today than we were two months ago,” he stated, adding that “the strengthening of the economy is the basis on which the output gap will close.”

Draghi also hotly defended the ECB’s asset purchase program and particularly its transparency given other central banks who do not release details. “We are very transparent on our purchase program,” he insisted.

Grilled over the current financial scandal related to Steinhoff International Holdings, the retailing giant that revealed accounting errors stretching back to 2016, Draghi admitted that the ECB would likely incur losses but insisted that reports of those losses have been “greatly exaggerated”.

“Nonetheless, these losses represent a small factor of the €1.6 billion net interest income we generated last year,” he explained.

Prior to the initial ECB announcement earlier, they had been trading at 1.1832 and 0.8811, respectively.