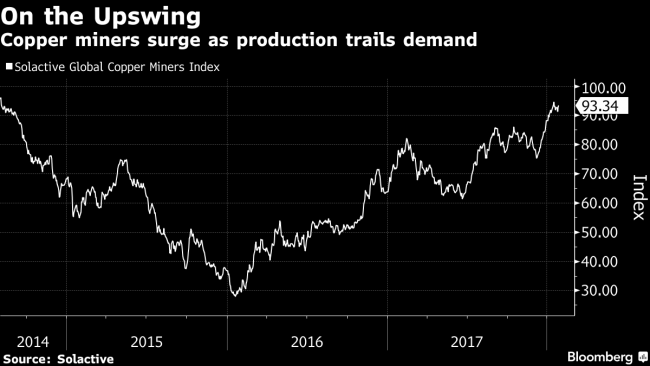 (Bloomberg) — mining deals are off to the best start in at least 12 years — and more money could be pouring into the sector this year.

More than $500 million in transactions are pending or were completed so far this month, the most recorded for January in Bloomberg data going back 12 years. Merger interest is picking up after years of under-investment limited mining companies’ capacity to meet rising demand for the metal, Stephen Gill, a managing partner at Pala Investments, said by phone.

“We see the large mining companies indicating their need to buy growth,” said Gill, whose mining and metals-focused investment company is the biggest shareholder in Nevada Copper Corp. “Due to years of under-investment, their project pipelines are now empty and can only be replenished through acquisition as it takes years to develop, permit and build a new mine.”

The appetite for copper-mining assets is surging after prices climbed the most in seven years in 2017 amid disruptions that widened the shortfall in supply. While the rally has faltered since prices climbed to a three-year high in late December, Goldman Sachs Group Inc (NYSE:). analysts say the outlook remains positive. Signs of synchronized global growth also are boosting demand prospects, highlighting the need to bring new copper projects online soon. The metal headed for its first weekly gain this year despite a decline Friday.

Production trailed consumption by 175,000 metric tons in the first 10 months of last year, according to the International Copper Study Group. The deficit widened from 143,000 tons in the same period a year earlier, after a labor strike at BHP Billiton (LON:) Ltd.’s Escondida mine in Chile and a temporary ban on concentrate shipments from Freeport-McMoRan Inc.’s Grasberg curtailed supply in the early part of 2017, the study group said.

There may be more supply troubles brewing. More than 30 labor contracts are up for negotiations this year in Chile and Peru, putting almost one-fifth of global copper supply at risk of disruption this year, Bloomberg Intelligence analysts Andrew Cosgrove and Eily Ong estimated.

“People forgot about the depleting copper mines or the grades declining at a large amount of the copper mines, plus the elevated strike risk which is occurring in the industry,” Ivan Glasenberg, chief executive officer of Glencore (LON:) Plc, said in an investor meeting in December.

“There is a real absence of major new projects on the horizon,” Adkerson said on the company’s fourth-quarter earnings call. “Supply’s reflecting a very long period of under-investments. And even as we speak today with higher prices, we don’t see a wave of new investments being started immediately.”

The combined capital spending of copper producers tracked by Bloomberg Intelligence has plunged by more than half to $52.3 billion last year, from almost $129 billion four years earlier.

The dearth of investments and the difficulty in finding lucrative projects meant less spending on acquisitions last year. The value of transactions pending or completed in 2017 shrank to $1.15 billion, from $3.03 billion a year earlier. Still, in terms of number of deals, the 51 transactions last year targeting copper assets were the most in Bloomberg data in at least 12 years.

To be sure, January’s performance isn’t always a clear indicator of the annual flow of money into mining deals. And $510.6 million in transactions this month pales in comparison to some of the large deals of the recent past, such as the $7 billion sale by Glencore of the Las Bambas copper project to a group led by MMG Ltd. announced in April 2014. Deals that year reached $11 billion, the highest since 2012.

Still, mining companies will be under heavy pressure to start buying new assets soon, especially with copper prices trading above $7,000 a metric ton for most of the past month.

“Copper valuations are disconnected from where copper prices will ultimately trade in the long run,” Cosgrove said in a telephone interview. Assets are being valued based on copper prices below $7,000, when the cost of bringing in new capacity is much higher, he said.

Energy planners must ‘go back to the drawing board’ and include oil and gas: ADNOC CEO

Energy planners must ‘go back to the drawing board’ and include oil and gas: ADNOC CEO