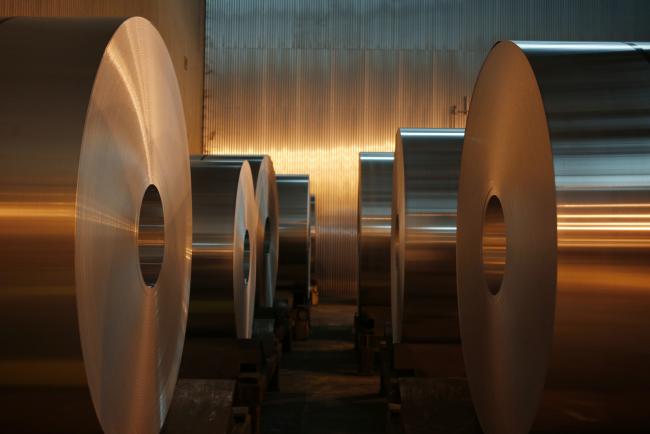 When Trump Puts America First, These Commodities Are at Risk

(Bloomberg) — Commodities would be particularly exposed if U.S. President Donald Trump’s decision to impose tariffs on foreign solar panels and washing machines sparks a tit-for-tat trade war with nations around the world.

The U.S. is both a major importer as well as exporter of raw materials, and China is one of its biggest partners. Beijing has been singled out by the president as especially guilty of undermining American industry. While Chinese officials have said the solar panel and washing machine tariffs were a “misuse” of trade measures, their response has until now been restrained.

Below we examine the potential flashpoints in the major commodities trade between the U.S. and China and how any possible disputes may play out.

has deep roots in the U.S., accounting for 31 percent of overseas purchases of the metal in semi-finished form. Trump is weighing the findings of a so-called Section 232 study into imports submitted by Commerce Secretary Wilbur Ross this month. The president has 90 days to respond to any threats by imposing tariffs and quotas or entering into talks with foreign producers to find a solution.

Goldman Sachs Group Inc (NYSE:). GS this week warned Trump is “more likely than not” to slap levies on the metal that’s used in everything from cars to cans, potentially boosting costs for Americans.

Chicago-based Century Aluminum Co. has called for a 20 percent tariff on supply from most countries. While a boon to domestic producers, duties will be a risk for industries from automobile to beverages: brewer MillerCoors LLC said last year that higher prices would have to be passed on to consumers. Meanwhile, China’s exports of the metal are still growing: they reached a record along with output in 2017.

Trump’s also considering findings of a Section 232 study into steel. While the U.S. is the world’s biggest importer, it’s not as reliant on China as it is for aluminum. American purchases in the first eleven months of last year were about 32 million tons, with Canada, South Korea and Brazil its largest suppliers. The world’s No. 1 producer, China, isn’t even among the top-ten sellers. The Asian country’s exports are shrinking as it consumes more domestically, and the decline is seen as unlikely to reverse.

A U.S. decision to raise import barriers would have limited impact on the global market, while harming the American economy by making its steel more expensive, according to an executive from a major Japanese producer. While such trade measures wouldn’t pose a significant hurdle for Chinese exporters, they risk spurring other countries to pursue their own protectionist campaigns, said Tomas Gutierrez, an analyst at Kallanish Commodities.

If China wanted to hit back, soybeans could be a weapon. That would sting farmers in the U.S., which sold $13.9 billion worth of the commodity to the Asian nation in 2017. While America counts China as its biggest market for the oilseed used in animal feed, swelling global stockpiles and bumper crops forecast from Brazil to Argentina mean Beijing has a choice of sellers to turn to in the event of a retaliation on U.S. imports.

Next up, meat imports were the second most-valuable agricultural trade between the U.S. and China in 2017, worth about $1.3 billion. The Asian country only restarted purchases of American beef last year, lifting a ban in place since 2003 that was triggered by mad cow disease.

In September, the World Trade Organization approved a request from the U.S. to investigate China’s tariff-rate quotas on agricultural products after it claimed the measures on rice, wheat and corn unfairly undermine U.S. farmers. The WTO is also looking into American allegations that the Asian country offered excessive support for its own farmers.

The shale boom has helped the U.S. challenge Russia and Saudi Arabia as one of the world’s biggest producers, and the end of a four-decade ban on crude exports means its supply is sailing to nations across the globe. And China’s welcoming its cargoes more than any other nation. Imports of American oil increased almost 1,500 percent in 2017, with purchases valued at about $3.2 billion.

Still, the U.S. was only the 14th-biggest seller to the world’s largest importer last year and China has a slew of suppliers from Saudi Arabia to Angola and Russia looking to sate its appetite. That means sellers of American crude would lose out on a prized customer if any restrictions were imposed while the Asian nation would be relatively unharmed.

On the fuel front, the U.S. doesn’t have much to lose. While China’s already shipping record amounts overseas, much to the chagrin of its neighbors in Asia, where cheap imports are undermining local refiners, only a trickle reaches American shores for now.