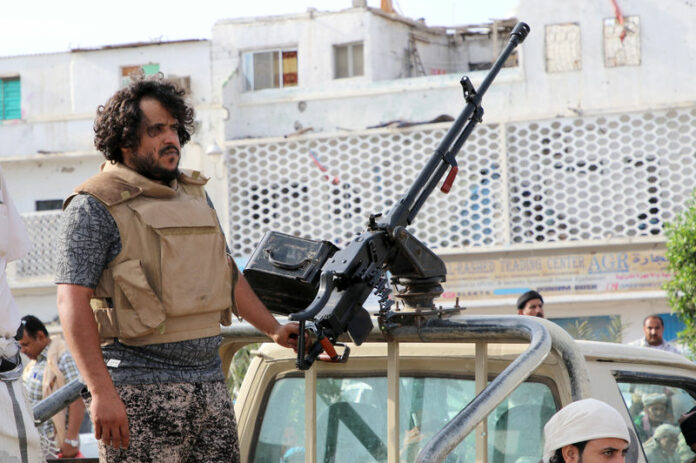 © Reuters. A fighter of the southern Yemeni separatists mans a machine gun mounted on a military vehicle securing an anti-government protest in Aden

ADEN (Reuters) – Fresh fighting erupted around Yemeni government facilities in Aden on Monday, witnesses said, as rival factions battled for a second day for control of the southern port city where the internationally-recognized administration is based.

They said forces loyal to the Southern Transitional Council (STC), which was formed last year to push for the revival of the former independent state of South Yemen, were apparently trying to wrest control of the two bases from Prime Minister Ahmed bin Daghr’s government.

In downtown Aden, most people stayed off the streets as government forces guarded the main road to al-Maasheeq palace where the government is based.

A government source said that if the Saudi-led coalition did not restrain the separatists, soldiers would leave anti-Houthi battlefronts elsewhere in the country to converge on Aden.

“The military commanders leading the battle in the western part of Yemen have given short notice to Saudi and UAE to intervene to end the fighting in Aden. Otherwise they will leave the battlefront and move back to Aden to assist President Hadi and the government,” the source said.

The two sides have traded accusations over who started the clashes on Sunday.

Sunday’s fighting broke out after the expiry of a deadline set last week by separatists from the STC for Hadi to dismiss the bin Daghr government, accusing it of corruption and mismanagement. The government denies this.

Bin Daghr has described the ultimatum as a coup against the internationally-recognized government, which the STC has accused of attacking civilians who had converged on the city’s Parades Square (NYSE:) from across southern Yemen for a rally.

No details were given of casualties sustained on Monday but the Yemeni Health Ministry said 12 people had been killed in Sunday’s clashes and 132 wounded.

Fighting had subsided on Sunday evening after bin Daghr called for a truce and ordered government forces back to barracks, but the clashes have effectively divided the city into two zones controlled by the separatists and the government.

Although Hadi remains in exile in Saudi Arabia, his administration and local allies nominally control about four-fifths of Yemen’s territory.

The factional fighting in the south compounds the misery of Yemenis whose country has been torn apart by three years of conflict between Hadi’s forces and the Houthis.