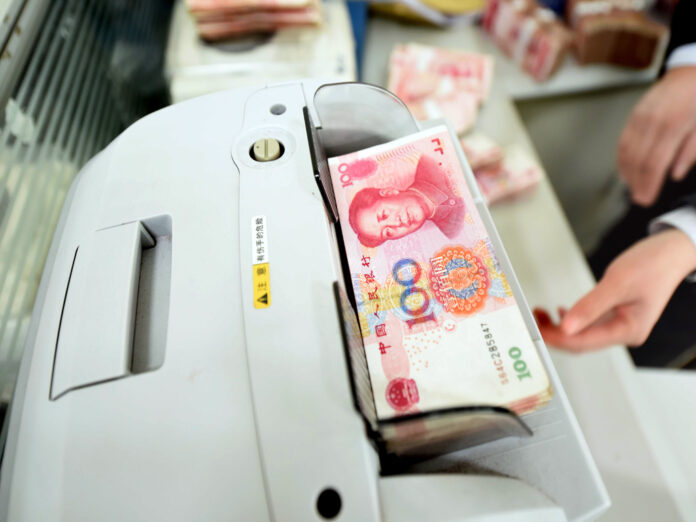 Yuan edges up on strong midpoint fixing, set for best month since 1994

SHANGHAI: China’s yuan edged up slightly against the US dollar on Monday, following a much stronger midpoint fixing by the central bank.

The dollar crawled up from lows on Monday but struggled to pull ahead from six straight weeks of losses, given its evaporating yield advantage and doubts about Washington’s commitment to a strong currency.

Traders in the yuan market said the dollar would likely continue with its downtrend, which supported the Chinese currency.

The yuan has gained 2.9 percent against the dollar this year, after strengthening about 6.8 percent in 2017. According to Thomson Reuters data, the Chinese unit is on course for its biggest monthly gain since 1994, when market rates were unified.

Prior to market opening on Monday, the People’s Bank of China (PBOC) lifted its official yuan midpoint to 6.3267 per dollar, the strongest level since Nov. 2, 2015 and the seventh straight firmer fixing.

In the spot market, the onshore yuan opened at

6.3266 per dollar and was changing hands at 6.3250 at midday, 45 pips firmer than the previous late session close and 0.03 percent stronger than the midpoint.

The spot yuan trade was tepid on Monday morning, with trading volume shrinking to $4.856 billion as of midday. On normal trading days, the half-day volume usually hits around $15 billion.

Traders said the rapid gains in the yuan and the extended weakness in the greenback have made many market participants nervous at the current level. And the spot yuan trade was settling around the midpoint level.

The yuan’s strong gain at the start of 2018 has caused some analysts to revise their year-end forecast. Economists at China International Capital Corporation (CICC) raised their forecast to 6.18 per dollar at the end of 2018, instead of 6.28.

“Continued strength of the CNY sets the foundation for a more affirmative outlook for financial opening-up, as well as further progress in RMB internationalization this year. In this regard, financial institutions with cross-border capabilities stand to benefit,” CICC said in a note.

The yuan strengthened around 1.2 percent against the dollar last week, but on a trade-weighted basis it edged up only 0.47 percent against a basket of currencies of trading partners, according to official data from the CFETS.

The index, published on a weekly basis, stood at 95.70 on Friday.

“Looking ahead, as RMB index approaches 96, market will closely monitor the reaction of the central bank to check whether there will be any intervention to slow down the appreciation,” said Tommy Xie, economist at OCBC Bank in Singapore.

The Thomson Reuters/HKEX Global CNH index, which tracks the offshore yuan against a basket of currencies on a daily basis, stood at 96.69, firmer than the previous day’s 96.59.

The offshore yuan was trading 0.01 percent weaker than the onshore spot at 6.3256 per dollar.