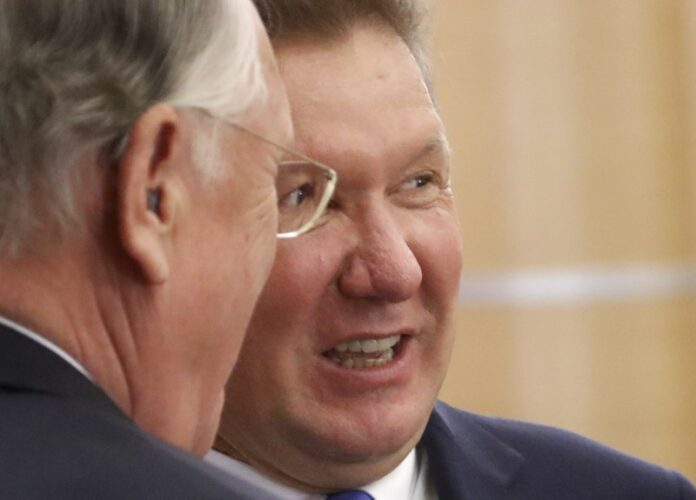 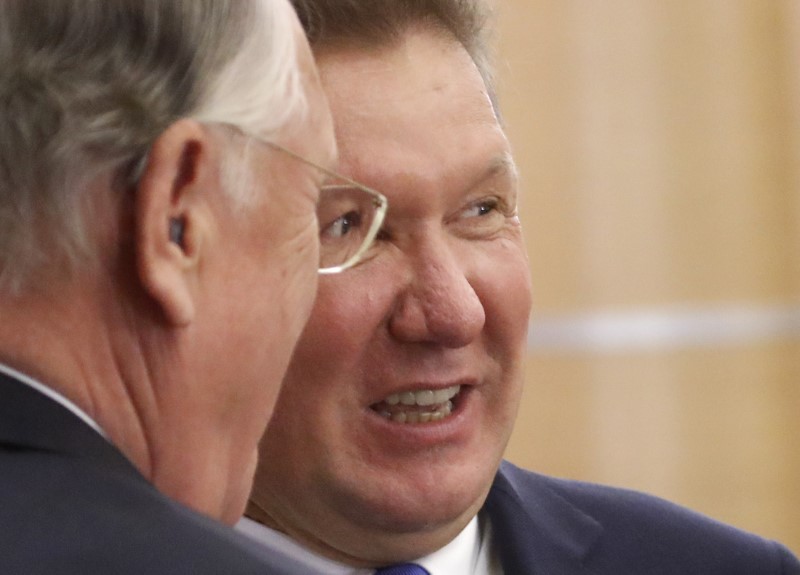 © Reuters. Gazprom Chief Executive Miller speaks with a participant as they attend a meeting with Russia’s President Putin and Kazakhstan’s President Nazarbayev in Sochi

By Polina Devitt and Christian Lowe

MOSCOW (Reuters) – The U.S. Treasury Department named major Russian businessmen including the heads of the two biggest banks, metals magnates and the boss of the state gas monopoly on a list of oligarchs close to the Kremlin.

The list, drawn up as part of a sanctions package signed into law in August last year, does not mean those included will be subject to sanctions, but it casts a potential shadow of sanctions risk over a wide circle of wealthy Russians.

But the so-called “oligarchs’ list” that was released on Tuesday, prompted in part by Washington’s belief the Kremlin meddled in the 2016 U.S. presidential election, covers many people beyond Putin’s circle and reaches deep into Russia’s business elite.

After the release of the report, the rouble opened down 0.1 percent against the dollar, while shares in some of Russia’s biggest companies fell too.

Among the biggest fallers was Norilsk Nickel, down 1.2 percent after its co-owner Vladimir Potanin was included on the U.S. list. Rusal, the world’s second-biggest producer of aluminum, whose co-owner Oleg Deripaska was also on the list, saw its shares tumble 1.4 percent in Hong Kong.

Representatives of many businessmen, including Potanin, Deripaska, metals magnate Alisher Usmanov and Alexei Mordashov, co-owner of Severstal, declined to comment. Some other businessmen are yet to reply to requests for comment.

But Russian market-watchers said the damage from the list was not as great as it could have been.

The list appeared to have been drafted based on oligarchs’ net worth, rather than attempting to establish who is closest to the Kremlin, an exercise that could have made it more toxic for those included. The White House said it would not immediately impose new sanctions on Russia.

“For now it all looks pretty mild,” said Oleg Kuzmin, an economist with Renaissance Capital, an investment bank.

The Treasury Department, in a statement accompanying the list, said people had been included on the list based on their net worth and “their closeness to the Russian regime.”

It said inclusion does not denote that people on the list are subject to sanctions or any other restrictions, that they meet the criteria for being put under sanctions, or that they are involved in any malign activity.

Among the businessmen on the list are German Gref, CEO of state-controlled Sberbank, Russia’s biggest lender, and Andrey Kostin, chief executive of the second-biggest lender, VTB, which is also controlled by the Russian state.

Sberbank declined to comment. VTB has not replied yet.

Usmanov, who is part owner of London’s Arsenal soccer club, and Eugene Kaspersky, CEO of the Moscow-based cyber security company that carries his name, were included on the same list.