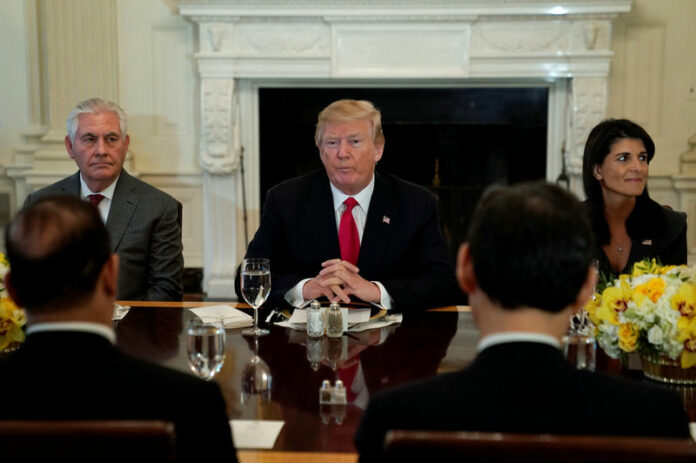 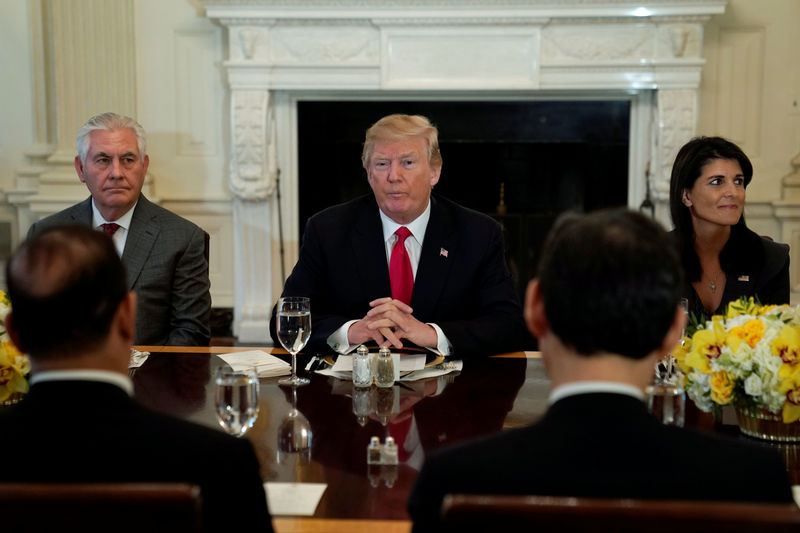 © Reuters. Trump plays host to a lunch for ambassadors to the United Nations Security Council at the White House in Washington

WASHINGTON (Reuters) – President Donald Trump, battling a probe into his campaign’s alleged ties with Russia and struggling to sell Americans on his leadership abilities, will take credit for U.S. economic gains in the past year in an address to Congress on Tuesday night.

Facing a looming deadline on an immigration controversy amid strong Democratic opposition, Trump will also call for a bipartisan compromise of the type that has eluded him during a turbulent first year in office marked by partisan battles.

Trump will visit Capitol Hill to deliver his first State of the Union speech at 9:10 p.m. (0210 GMT on Wednesday).

Aides said the Republican president would use the televised speech to take credit for advances in the economy since he took office and tout the benefits of a tax overhaul approved by the Republican-controlled Congress in December that was his first major legislative victory.

But the atmosphere in the House of Representatives chamber where Trump will speak could be tense. Several Democratic lawmakers have said they would boycott the event. Some Democratic women who will attend plan to wear black in support of the #MeToo movement against sexual harassment.

Ahead of Trump’s speech, Republicans and Democrats were deeply divided over immigration. Lawmakers are facing a Feb. 8 deadline to try to reach a compromise on the issue and pass a new budget measure to avoid a second government shutdown.

To attract Democratic votes for an immigration deal, Trump has said he is open to letting “Dreamers,” a group of immigrants brought into the country illegally as children, stay in the United States.

In return, he has demanded funding for a wall on the border with Mexico and measures to curb family sponsorship of immigrants, proposals that have failed to gain traction with Democrats in the past.

U.S. Senator Dick Durbin, the No. 2 Democrat in the Senate, said so far the two sides had made little progress in bridging differences on immigration.

“We didn’t agree on anything,” Durbin said after a meeting with Republican lawmakers on Capitol Hill on Monday. “It’s the same place as it was before, but there was a sense of urgency.”

Trump will also promote a $1.7 trillion plan to rebuild America’s aging roads and other infrastructure, but he is not expected to offer many details.

He will speak at a time when he is being buffeted by a drumbeat of headlines about U.S. Special Counsel Robert Mueller’s investigation into whether Trump or his aides colluded with Russia during the 2016 presidential election.

U.S. intelligence agencies have concluded that Russia interfered in the campaign using hacking and propaganda to attempt to tilt the race in favor of Trump. Russia has denied meddling. Trump has denied any collusion with Russia and has called the Mueller’s investigation a “witch hunt” and “hoax.”

Americans, at the same time, are voicing concerns about Trump’s fitness for office. His job approval ratings are about 40 percent, an alarming number with congressional elections coming in November that will determine whether Republicans maintain control of the U.S. Congress.

“We hope the president focuses on economic growth and accomplishments and leaves out the drama,” said Republican strategist Scott Reed. “Have a nice world-class event that allows people to focus on his successful accomplishments and not the daily drama.”

Trump is expected as well to address the various global crises that have persisted during his watch, such as North Korea’s nuclear challenge and Iran’s clout in the Middle East.

Trump’s drive for more reciprocal trade with China and other countries is also expected to be a dominant theme. Trump has so far been unsuccessful in lowering U.S. trade deficits around the world.