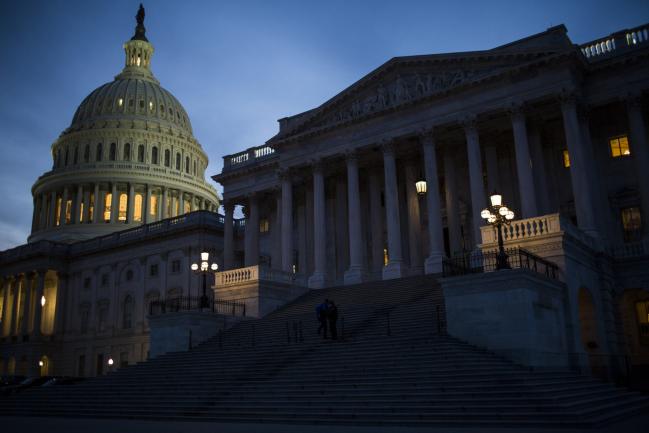 © Bloomberg. The U.S. Capitol building stands in Washington, D.C., U.S., on Tuesday, Dec. 19, 2017. Congressional Republicans kicked off the final leg of their six-week legislative sprint to overhaul the U.S. tax code and deliver a major policy victory for President Donald Trump before year’s end. The House approved the bill Tuesday and Senate leaders intend to vote on it Tuesday evening.

(Bloomberg) — The bipartisan budget deal President Donald Trump hopes to sign this week would set the stage for a massive increase in the federal deficit in coming years, a Congressional Budget Office report shows.

An increase in discretionary spending caps would add $296 billion in spending authority over the next two years — with a follow-up massive spending bill due by March 23 that will allocate which accounts get the extra money.

The plan includes $84.4 billion in discretionary emergency spending for disaster relief, though only about $25 billion of that will be spent in the next two years, CBO estimates. The CBO estimated that nearly $17 billion of the spending won’t even occur in the coming decade.

There also are additional tax cuts for assorted business interests and other changes to mandatory spending, alongside some modest spending trims that will mostly affect fiscal 2026 and 2027 — a couple of presidential terms away.

CBO says that over 10 years the deficit would increase $38 billion by counting only “direct spending and revenue,” but that figure doesn’t consider budget cap adjustments.

The nonpartisan Committee for a Responsible Federal Budget, analyzing the CBO’s report, said the deal would add a net $320 billion to deficits over a decade, or $418 billion counting the additional interest costs.

The deficit-hawk group now expects the deficit will soar to $1.2 trillion in fiscal 2019 alone.