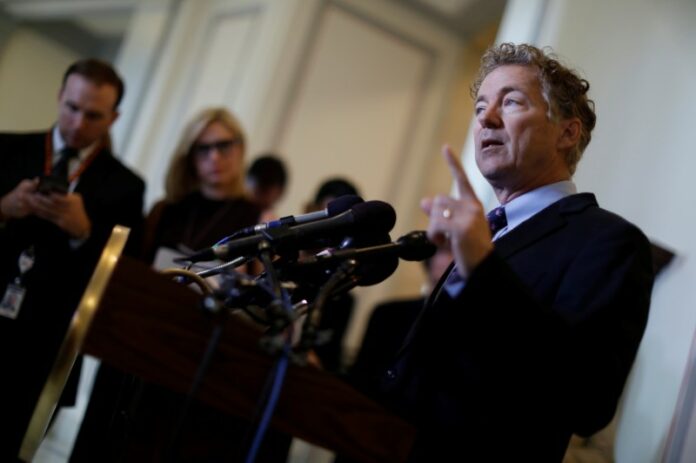 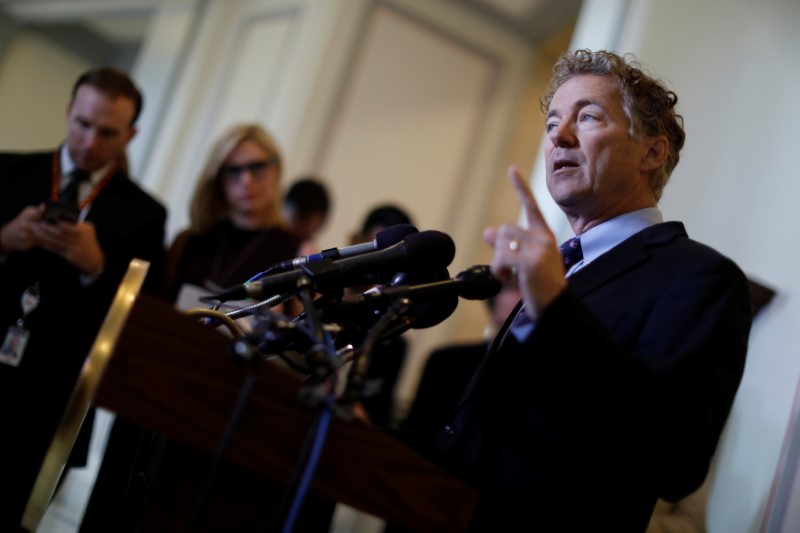 © Reuters. Sen. Rand Paul (R-KY) speaks at a press conference about the latest Republican Effort to repeal and replace the Affordable Care Act on Capitol Hill in Washington

By Richard Cowan and Amanda Becker

In evening remarks on the Senate floor that lasted an hour, the senator from Kentucky said the bill would “loot the Treasury … The reason I’m here tonight is to put people on the spot. I want them to feel uncomfortable,” he said.

The budget bill, backed by Republican President Donald Trump, would end for some time the fiscal policy squabbling that has consumed Congress for months. But it would be costly and highlight a basic shift in Republican thinking.

Once known as the party of fiscal conservatism, the Republicans and Trump in December added an estimated $1.5 trillion to the national debt with a sweeping tax overhaul bill, their only significant legislative achievement of 2017.

The new budget bill would raise military and domestic spending by almost $300 billion over the next two years. With no offsets in the form of other spending cuts or new tax revenues, that additional spending would be financed by borrowed money.

“I ran for office because I was very critical of President Obama’s trillion-dollar deficits,” Paul said.

“Now we have Republicans hand in hand with Democrats offering us trillion-dollar deficits. I can’t in … good faith, just look the other way because my party is now complicit in the deficits. Really who is to blame? Both parties,” he said before ending his remarks at 7 p.m.

The delay gave Paul a chance to speak his peace, but it was not expected to block the bill in the Senate. The deal, crafted by Senate leaders on Wednesday, would stave off a government shutdown before a deadline on Thursday night, while extending the government’s debt ceiling until March 2019.

If the Senate approves it, the bill will move to the House of Representatives, where a vote was planned for late in the evening and its passage was widely expected but not assured amid resistance from lawmakers of both parties.

Final passage of the bill would remove some uncertainty from U.S. financial markets at a turbulent time. Stocks plunged on Thursday on heavy volume, throwing off course a nearly nine-year bull run. The slumped 3.8 percent.

Republican Senate Majority Leader Mitch McConnell, expressing impatience with his fellow Kentuckian Paul, said: “Funding for the government expires in just a few hours. The bipartisan agreement before us funds our troops at the level requested by the Pentagon, addresses the opioid crisis, which is extremely big in the state of Kentucky and around the country, funds our veterans and many other shared priorities.

“Now I understand my friend and colleague from Kentucky does not join the president in supporting the bill. … But I would argue that it is time to vote.”

The bill is also opposed by House Democratic Leader Nancy Pelosi because Republican House leaders will not guarantee her they will allow a debate later on about taking steps to address the problem of 700,000 “Dreamer” immigrants.

Some Democrats want a law to protect the Dreamers, young people brought illegally to the country as children mostly from Mexico, from deportation. Trump threatened in September to end a program that protects them in March. Senate Republicans have pledged to hold a separate immigration debate this month.

Even without Pelosi, House passage of the budget bill was widely expected because it includes more money for disaster-relief, infrastructure and healthcare.

House Speaker Paul Ryan, who backs the bill, predicted the Republican-controlled House would pass it. “I think we will,” he said in a radio interview. “It’s going to need bipartisan support. We are going to deliver our share of support.”

In an appeal to Democrats to vote for the bill, Ryan said during a news conference that he would bring an immigration bill to the House floor after spending measures are enacted. But he fell short of making an unconditional guarantee.

Trump has offered to give the Dreamers protection from deportation and a pathway to citizenship over 10 to 12 years, but he wants in exchange $25 billion to fund his proposed U.S.-Mexico border wall and tighter restrictions on legal immigration. Democrats have balked at those terms.

The budget bill would allow for $165 billion in extra defense spending and $131 billion more for non-military programs, including health, infrastructure, disaster relief and efforts to tackle an opioid crisis in the country.

Many Republicans, whose party controls both chambers of Congress, said the military’s need for funding justified the extra spending. But the conservative House Freedom Caucus said it opposed the measure. Caucus chairman Mark Meadows called it “eye-popping and eyebrow-raising.”