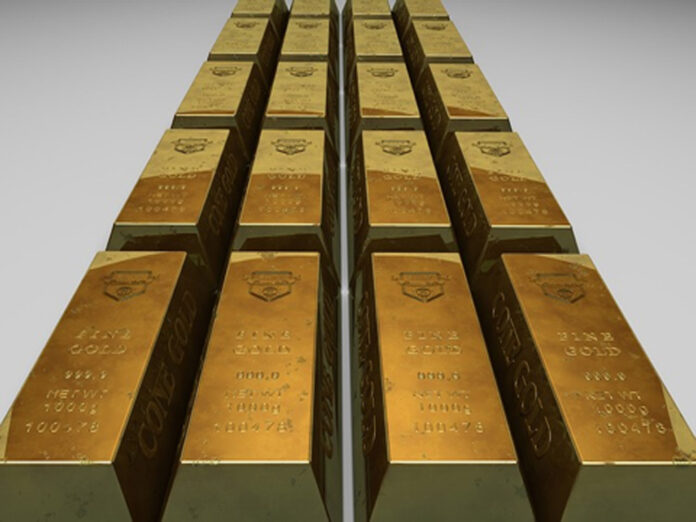 LONDON: Gold slipped on Friday as tumbling equity markets, a firmer dollar and worries about rising global interest rates weighed, though the metal remained underpinned by its appeal as a safe haven asset in times of market turmoil.

The dollar rose versus a currency basket, heading for its best week since late October, while a 4 percent drop in Chinese shares dealt reeling world stock markets a fresh blow, as nerves about rising borrowing costs and soaring volatility weighed.

“Just like any other commodity gold is getting caught up in risk reduction, but overall the stock market gyrations have most certainly provided underlying support,” said Ole Hansen, head of commodity strategy at Saxo Bank.

“The dollar is strong on the back of (rising risk reduction). (But) the market is concerned about whether this (U.S) tax gamble is going to pay out. If it doesn’t it could have a negative growth impact, that’s not going to be dollar-positive.”

The yield on benchmark 10-year US Treasuries, which tends to be the driver of global borrowing costs, was hovering at 2.86 percent, just short of both its Thursday peak and Monday’s four-year high of 2.885 percent.

“The threat of rising interest rates will have some downside pressure on gold … However, in the near-term gold will gain due to volatile markets,” said Helen Lau, analyst at Argonaut Securities.

There was limited reaction as the US government staggered into another shutdown after lawmakers failed to meet a funding deal deadline, but it did play into many of the overarching market concerns that have taken hold this month.

Holdings of SPDR Gold Trust, the world’s largest gold-backed exchange-traded fund, have fallen over the last three sessions, and declined 1.7 percent so far this week, the worst since the week ended July 30, 2017.