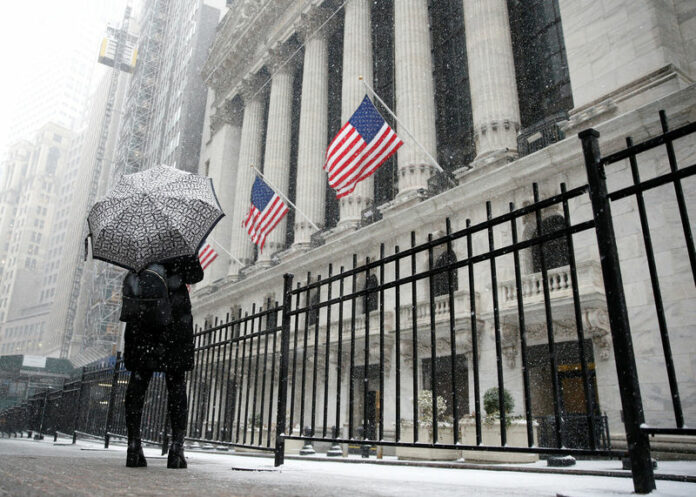 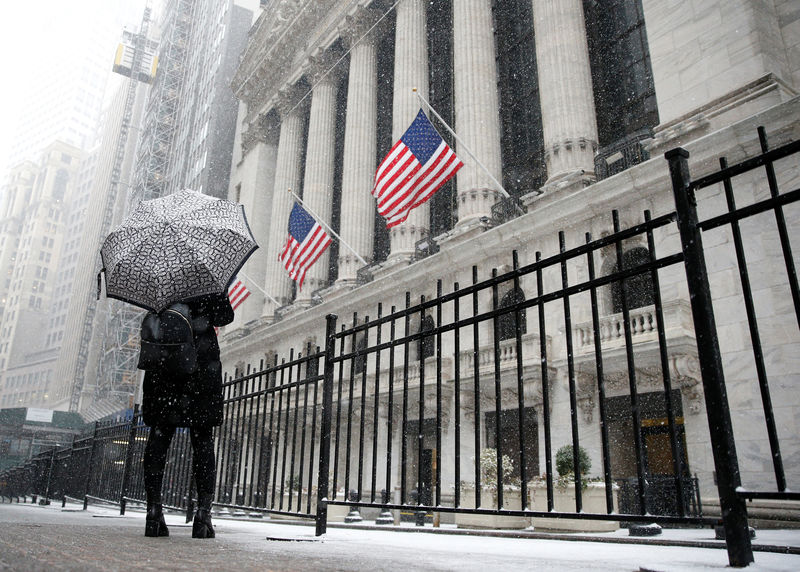 © Reuters. A woman looks up as snow begins to fall in front of the NYSE during the morning commute in New York

DUBLIN (Reuters) – A surprise surge in U.S. wage growth has rocked global stock and bond markets in the past week, and inflation figures from three of the world’s biggest economies could dictate whether investors are in for another rollercoaster ride in the coming week.

Stocks have had their worst week since the height of the euro zone crisis in 2011 after jobs data a week ago posed the question markets are now grappling with: Is long-absent inflation returning to the strengthening world economy?

Some hints of what the answer to that is – and what it may mean for the era of low interest rates – could emerge with the latest consumer price snapshots from Britain on Tuesday and Germany and the United States a day later.

German inflation, a barometer for how prices are faring across the euro zone, should be of least concern, assuming the final figures for January match weak provisional data that showed annual consumer price inflation slowing to 1.4 percent.

Although a landmark wage deal and a purse-string loosening coalition agreement will likely add to inflation over time, the current moderate price pressures – even in booming Germany – shows the euro zone outlook is quite different to the United States.

The number of Americans filing for unemployment fell to a near 45-year low last week, but the jobless rate in the euro zone is still at almost 9 percent – and the broader slack in the jobs market, including part-time and temporary workers, could be twice as high, economists say.

“Although the labor markets in some countries such as Germany seem to be running dry, which will be reflected in stronger wage growth, the unemployment rate in the other euro countries is, on average, still very high,” said Commerzbank (DE:) economist Ralph Solveen.

“In the euro area as a whole, wages are therefore unlikely to rise particularly rapidly. As a consequence, core inflation ought to remain around 1 percent, at least this year, providing the ECB with the arguments to maintain its expansionary stance.”

Spanish Inflation data on Thursday will broaden the picture out to those countries where unemployment is at its highest, while fourth-quarter growth data for the bloc as a whole – and individually for the likes of Germany, Italy and the Netherlands – are set to show an ever broadening recovery.

In Britain, where consumers have been facing price pressures for far longer after the 2016 Brexit vote pushed down the value of the pound, the Bank of England said on Thursday that it sees a growing need to keep a grip on inflation.

That means raising interest rates sooner and by more than it flagged only three months ago, as central banks move towards tightening monetary policy a decade after the financial crisis.

Data on Wednesday will show whether inflation continues to hold steady at 3 percent where it has spent three of the last four months, and if November’s 3.1 percent reading can be considered a post-Brexit peak.

That will leave markets squarely fixed on the U.S. inflation report later that day, alongside retail sales figures also due out for January.

Economists polled by Reuters see core inflation – which excludes the volatile food and energy components – rising by 0.2 percent month-on-month, a touch slower than December when consumer prices recorded their largest increase in 11 months.

That should nevertheless hold the annual rate steady at 1.8 percent, according to the poll, given the tough comparison with a year ago when consumer prices jumped at the fastest rate in nearly four years.

“While there is likely to be significant focus on this report, the reality is that the inflation narrative is not poised to gather any real momentum until Q2 when the idiosyncratic effects from last year – wireless price wars, etc. – finally roll off the year-on-year calculation,” RBC Capital Markets’ analysts wrote in a note.

“But the potential for the market to overreact to an inflation scare is non-trivial.”