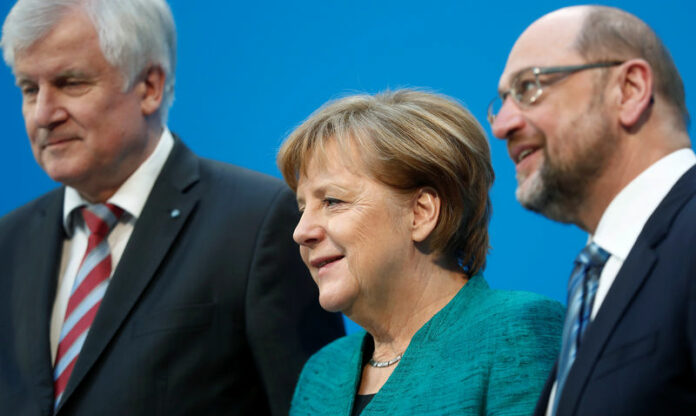 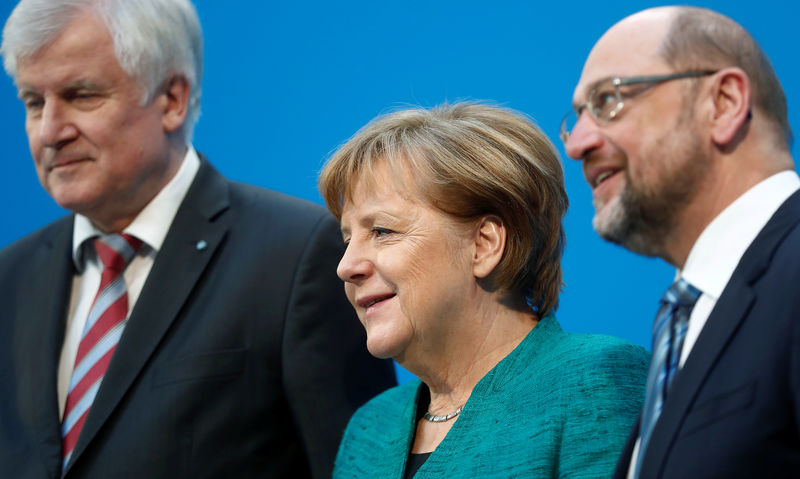 © Reuters. Coalition talks of CDU/CSU and SPD in Berlin

By Dhara Ranasinghe and Sujata Rao

LONDON (Reuters) – The shape of Germany’s new coalition heralds a potential shift towards looser purse strings in its European and domestic budget policies, which could fuel a fresh rally in southern European bond markets.

The change in the make-up of the new government in Berlin and its willingness to pay more into the European Union budget potentially ushers in a change in how Germany deals with the weaker economies in the single currency bloc.

The shift in Germany could be the most supportive of EU and euro area reform since the beginning of the euro crisis in 2011-2012, analysts at Barclays (LON:) told clients.

That’s because for years former finance minister Wolfgang Schaeuble insisted on fiscal discipline and balanced budgets at home and across the euro zone, a source of frustration for southern Europe’s highly indebted countries.

Given limited budgetary flexibility in debt-laden Italy, Spain and Portugal, many member states have argued that those running a surplus – primarily Germany – must drive any spending boost to the benefit of the whole bloc.

Any move to increase spending, albeit at a modest level, therefore will further lift the euro zone’s economic outlook, with a disproportionately positive impact on the poorer states.

This week’s coalition agreement handed the finance ministry post to the center-left Social Democrats, but SPD members could still scupper the deal in a ballot whose results will be announced on March 4.

The deal also laid out plans to develop the euro zone’s bailout fund into a full-blown European Monetary Fund and signaled willingness to pay more into the EU budget.

“The German economy is already on a strong footing and for us, the signal this coalition deal sends to the European Union is more important than somewhat looser fiscal prudence,” said Kaspar Hense, portfolio manager at BlueBay Asset Management.

In addition, a more pro-European stance from Berlin could dent the appeal of anti-euro parties across the bloc, especially in Italy, which goes to the polls in early March.

“Having handed over two key positions to the SPD is an acknowledgement that (Chancellor Angela) Merkel wants to give the European project a further boost,” said Hense. “In that regard strengthening the Germany-France pro-European axis could be more important than the upcoming Italian election.”

The election in Italy has been watched closely for fear of populist upsets that could spill over into other countries. Some of those fears were put to rest by last year’s election of French President Emmanuel Macron, a pro-European centrist.

The possibility of a German spending boost could of course lift nominal borrowing costs across the euro zone as it adds fuel to already simmering growth and could encourage the European Central Bank to hasten the end of the cheap-money era.

Despite this, investors reckon that the yield premia that they demand to hold the debt of lower-rated southern European countries over top-rated German may fall.

“As the European story gets better, people are more willing to think about things other than German Bunds so there is likely to be a tightening of bond yield spreads,” said Chris Bailey, European strategist at international financial services firm at Raymond James.

Foreign investors hold roughly a third of Italy’s bond market – a number that could rise as the ECB slowly reduces its presence in the euro zone’s sovereign bond markets.

“If you look at implied risks for the periphery, those are falling, so there may be some come-back of international investors especially as the ECB won’t be gobbling up all the extra supply,” said Oliver Rakau, chief Germany economist at Oxford Economics in Frankfurt.

Few expect a massive German spending splurge, with the coalition deal currently seeing extra spending of 46 billion euros ($58 billion) over the next four years. That, according to Frederik Ducrozet, Pictet Wealth Management economist, amounts to under 0.5 percent of GDP a year.

But the “multiplier” effect of the additional spending should not be under-estimated, Bailey at Raymond James said.

He estimated that Germany’s economy could grow by as much as 2.5 percent in the coming year, compared with forecasts for 2018/2019 of just over 2 percent. That in turn could drive an 0.2-0.4 percent-plus annualized improvement in general EU growth.

Nick Wall, a portfolio manager at Old Mutual Global Investors, is one of many who sees southern European bond spreads over Germany already as too tight, leaving investors little extra risk premia.

But he acknowledged the implications of recent events, adding that the political shift in Germany reduced the risk of a sharp widening in southern European bond yield spreads.