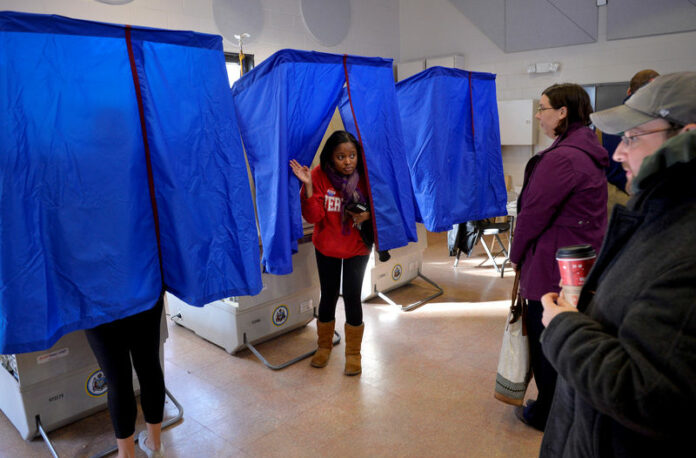 © Reuters. FILE PHOTO: A voter leaves the polling booth during the U.S. presidential election in Philadelphia

The new map is the result of a Jan. 22 order from Pennsylvania’s Supreme Court, which invalidated the existing district boundaries as an illegal gerrymander by the Republican-controlled legislature.

“The Republican legislative leaders in the House and Senate have agreed to a congressional district map that complies fully with the Pennsylvania Supreme Court’s order and opinion,” Senate President Pro Tempore Joe Scarnati and House Speaker Mike Turzai said in a joint statement late on Friday. “We will be submitting our map to the governor this evening.”

Under the court’s order, legislators had until Friday to come up with a new map, and Wolf has until next Thursday to accept or reject it.

In a statement earlier on Friday, Wolf said he had retained a mapmaking expert to assist his evaluation.

“I intend to do my part to implement the court’s order and ensure that fair maps become Pennsylvania’s new reality,” he said.

It was not immediately clear whether Democratic lawmakers played a role in the new map proposal. Wolf said he would consider his options if the map was not the result of a “bipartisan process.”

The Pennsylvania fight is one of several across the United States over partisan gerrymandering, in which lawmakers design legislative districts to weaken the power of an opposing party’s voters.

Republicans have held 13 of the state’s 18 seats in the U.S. House of Representatives since the current map went into effect for the 2012 election, despite Pennsylvania’s status as a closely divided swing state.

The court’s majority said it would draw the lines itself if an acceptable map is not reached by next week.

In that case, Republican leaders have said they would consider a federal lawsuit to stop the court, arguing that it does not have the legal authority to create its own map.

The case stems from a lawsuit filed last year by the League of Women Voters of Pennsylvania and several Democratic voters challenging the map under the state constitution’s equal protection and free speech guarantees.