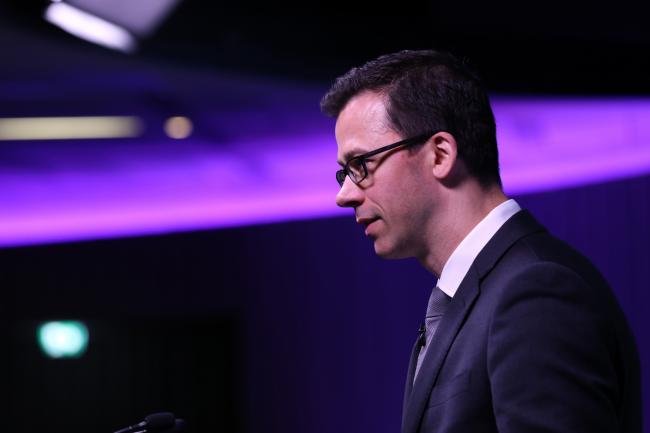 Ian McCafferty, seen as one of the most hawkish members of the rate-setting panel, reiterated that on LBC Radio Monday, saying it’s likely borrowing costs will rise earlier, and to a greater extent, than previously thought. Fellow official Gertjan Vlieghe said at a separate event that the U.K. will need a succession of interest-rate increases in the next few years to stop the economy from running too hot.

“Growth is holding up and we are still running with inflation significantly above the target,” McCafferty said on the phone-in show. “Interest rates will have to go up gradually.”

In summarizing what the Monetary Policy Committee said Feb. 8, Vlieghe said “a bit more than” three quarter-point increases were probably needed over the next three years.

The central bank lifted borrowing costs for the first time in a decade late last year and, at its most recent decision, didn’t dispute the view that the next increase could come as early as May. Since last week’s meeting, investors have priced in closer to four increases.

Under the market curve of “approximately three hikes over the forecast period,” the economy would “still have excess demand and wouldn’t quite get inflation back to target,” Vlieghe said in London on Monday. “Further rises in rates are likely to be appropriate. We are on a trajectory, it was not one hike in November and a long break.”

Global growth is offsetting the ill-effects of the Brexit vote and low unemployment is starting to push up wages, though the outlook is still uncertain, he said. Three more hikes would bring the benchmark up to 1.25 percent from the current 0.5 percent.

“We expect them to hike already in May if markets are calm and economic data hold up,” said Danske Bank senior analyst Mikael Olai Milhoj after Vlieghe’s remarks.

Still, the BOE doesn’t want to tighten so quickly that it thwarts economic growth, which is already set to be the slowest in the European Union as the U.K. leaves the bloc next year. In a local newspaper interview on Sunday, Chief Economist Andrew Haldane was cited as saying that the BOE is in “no rush” to rein in the stimulus that’s been in place since the financial crisis a decade ago.

McCafferty said that investment remains sluggish. Given the pickup in global growth, he would expect to see investment growth of at least 10 percent a year, compared with the current rate of about 4 percent. Still, the U.K. is expanding about as fast as it can at the moment without generating inflationary pressure, he said.

Vlieghe also gave an indication about another leg of the BOE’s stimulus measures — the bond-purchase program that has been paused since early last year. While the bank had previously stated that it would not alter its reinvestment process until U.K. rates were about 2 percent — in order to give officials room to cut by 150 basis points if the economy required — the official said that is no longer strictly the case.

“The concept is entirely valid. The only detail that’s changed since the summer of 2016 is we’ve changed our mind about how low interest rates can appropriately go. So we used to think we didn’t want to take them below a half a percent. We’ve done some more work on that and we have now come to the conclusion that we can take them close to, but still a little bit above, zero. So that’s of course given us a little bit more room for maneuver.”

His comments, which echo those made by Governor Mark Carney in October, were made at an event on debt at the Resolution Foundation.