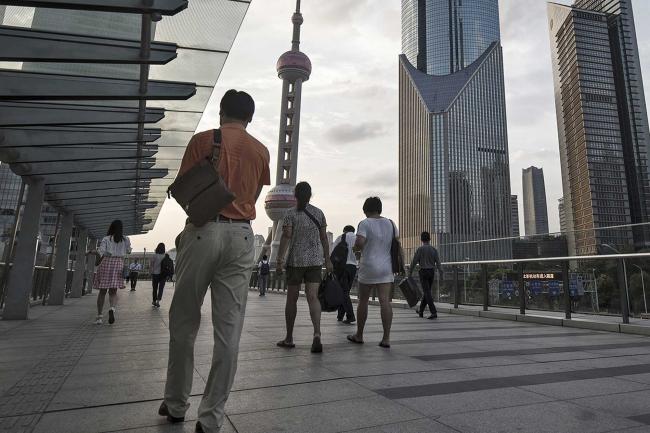 © Bloomberg. Pedestrians walk along an elevated walkway in the Lujiazui Financial District in Shanghai, China, on Monday, Sept. 4, 2017. The Chinese central bank\’s tight leash on liquidity is straining the bond market, with the benchmark sovereign yield climbing to near the highest level since April 2015.

(Bloomberg) — China may be forced to soften efforts to curb risks in its financial sector in order to protect the economy, said an analyst who made her name warning about the dangers of the nation’s credit binge.

Despite the crackdown on shadow banking and other areas of financial risk which got underway last year, China’s economic growth is still being underpinned by rising debt, said Charlene Chu, a senior partner at Autonomous Research in Hong Kong. The government’s harsh rhetoric masks a softly-softly approach to tackling financial risk amid fears that stronger action would endanger the economy or the balance sheets of Chinese banks, she added in a recent interview.

“In the past, we had limited acknowledgment of problems and little action,” said Chu, who has been consistently bearish on the threats posed by a mountain of credit she estimates at 226 trillion yuan ($36 trillion) at the end of 2017. “Now we have clear recognition of problems, but what I call a ‘Chinese medicine’ prescription for addressing them — which emphasizes stability, taking it slowly, and eliminating the highest risk behavior.”

A more aggressive approach would better address fundamental underlying problems, Chu said, but would be more disruptive in the near term. A softer approach may render China vulnerable to systemic risk in the years ahead.

Chu’s views contrast with those of several other analysts and investors who say regulators have made solid progress in curbing excessive leverage.

She said one litmus test of China’s resolve will be how far it pushes the campaign to impose strict regulations on asset management products, a key part of the shadow banking crackdown. The government has retained a mid-2019 deadline for removing bank guarantees on the products, people familiar with the matter said last week.

A rebound during the second half of last year in banks’ issuance of wealth management products — a major part of the shadow banking sector — may point to a faltering in the regulators’ campaign against financial risk, Chu said. If all areas of shadow banking contract at the same time, it could prove too painful for economic growth and lead to an explosion of bad debt on the books of Chinese banks, she added.

Below is a transcript of Bloomberg News’s interview with Chu. The comments were edited for brevity and clarity:

Has China made any progress on the regulatory front?

The biggest progress they’ve made is slowing the growth of WMPs. The days of extreme growth like we saw in 2015, when off-balance-sheet WMPs grew 73 percent for the whole sector, are now clearly over. Total WMPs contracted in the six months to end-June 2017, but growth has come back a bit since then. Last year banks kept saying that what the authorities care about is putting an end to interbank WMPs, which is when a WMP invests in another WMP or banks invest in a bunch of WMPs. They said the authorities weren’t very focused on the other stuff, and that there weren’t too many constraints on issuing products to retail customers and other institutional customers. By the end of the first half, most interbank WMPs had rolled off, so by year-end the total WMP portfolio was back on the rise.

Will WMPs continue to grow this year?

Unless the authorities are willing to allow for a significant slowdown in growth, they’ve got to allow WMPs to expand. Since 2008, banks have been stowing away credit in three locations: WMPs, trust products, and asset management plans. Last year regulators announced curbs on issuance of asset management plans, and this year they are clamping down on trust products. If they also don’t permit any WMP growth, then we’re in a climate where all of the major sources of new shadow credit and hiding old bad credit are no longer open.

How successful have the authorities been with deleveraging?

There’s actually been zero deleveraging based on our measure of credit, despite the fact we see it written about constantly. By definition, deleveraging means either the total outstanding amount of leverage is going down — and that’s not the case by any measure, including the People’s Bank of China’s TSF measure of broad credit — or that the ratio of credit/GDP is declining. We have seen some improvement on the latter, but based on our Autono-adjusted measure, TSF credit/GDP is still rising. The market widely believes that the flow of credit in 2016 was off the charts, but the reality is that 2017 was very close in terms of additional credit flow. It’s the same old story that we have seen many, many times over the years — a pullback in certain sources of credit that are offset in other areas. The same thing happened last year. Most market participants are looking at the PBOC’s TSF measure of broad credit or the Depository Corporations Survey and thinking the country has found this miracle path where the accumulation of credit has stabilized without damaging GDP growth. But that’s simply not true. The official data is increasingly divergent from reality.

Why is it difficult for the government to strike a balance?

Ultimately, we’ve got three conflicting objectives here. On the one hand, the authorities say they want to double per capita GDP by 2020, yet they also say they want to clean up all financial sector risks in the next three years, and they want to accomplish both of these while maintaining the perception of pristine bank balance sheets.

These three goals simply don’t jive. If growth and stability still reign, which they usually do in China, then it’s hard to see how the authorities can be really harsh and truly clean up all financial sector problems. This is positive for growth and probably means that nothing will change too dramatically. However, if the authorities prioritize tackling financial sector risk above growth, then there is an underappreciated degree of resolve that could significantly upset the status quo and the perceived strength of banks’ financial statements. How the authorities proceed with the new AMP rules is going to be our first indication of whether they are prioritizing growth above financial sector risk or vice versa.