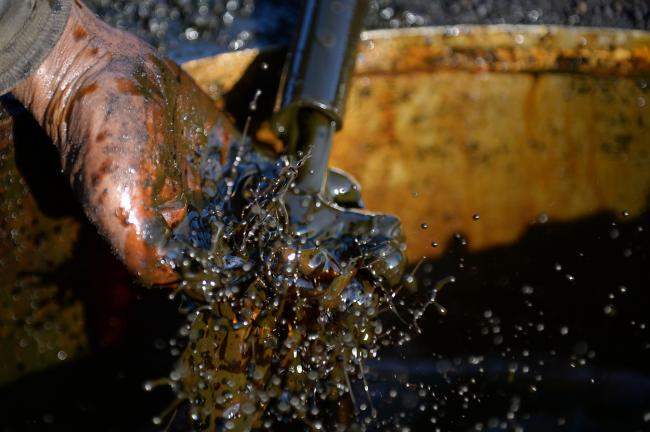 © Bloomberg. Extracted crude oil splashes on a worker’s hand as it’s being pours from a pipe in the village of Wonocolo, East Java, Indonesia.

(Bloomberg) — Crude rose after the worst weekly decline in two years as OPEC shrugged off the threat that U.S. shale drillers will swamp the market with excess supplies.

Futures in New York advanced as much as 2.8 percent, the biggest intraday jump in more than a month. Strong demand for crude coupled with restrained production from OPEC and allied suppliers will erase any remaining glut, United Arab Emirates Energy Minister Suhail Al Mazrouei, who’s also president of the cartel, said Monday. Global demand is robust enough to absorb growing output from shale fields, according to Kuwait’s oil minister.

Oil prices are rising in response to “statements from OPEC telling us they believe compliance to the cuts is going to be at historic highs,” Bart Melek, head of global commodity strategy at TD Securities in Toronto, said by telephone. “Ultimately, the market is well-supported around $60. We do see the market rebalance. Inventories will continue to drop.”

The U.S. benchmark crude contract lost almost 10 percent of its value last week amid concerns about the broader economy and whether demand will continue to rise. Kuwait Oil Minister Bakheet Al-Rashidi characterized the selloff as a “correction only.”

Shale drillers in places like West Texas, Oklahoma and North Dakota may imperil the carefully-laid plans of the Organization of Petroleum Exporting Countries and fellow travelers like Russia and Mexico. The number of rigs searching for U.S. oil jumped 34 percent in the past year, spurred on as prices recovered from the deepest market rout in a generation.

As a result, U.S. oil production is expected to exceed 11 million barrels a day before the end of this year. OPEC’s own analysts on Monday upped their estimate for how much oil non-cartel suppliers will pump this year by 250,000 barrels a day to 1.4 million a day.

“Shale is coming and the expectation is that it will come stronger than in 2017, and this is something that we have to watch,” Al Mazrouei said Monday in an interview in Dubai. “But considering all factors, I don’t think it will be a huge distorter of the market.”

for April settlement rose 93 cents to $63.72 on the London-based ICE Futures Europe exchange, and traded at a $3.67 premium to WTI for the same month.

Barkindo also said the cartel and its non-OPEC partners need to continue cooperating beyond 2018 and that their accord is still a “work in progress.”

“Essentially what we see today is a reversal of Friday’s sell-off,” said Giovanni Staunovo, an analyst at UBS Group AG in Zurich. “The overshooting of prices in January has triggered a stronger supply response from U.S. frackers.”