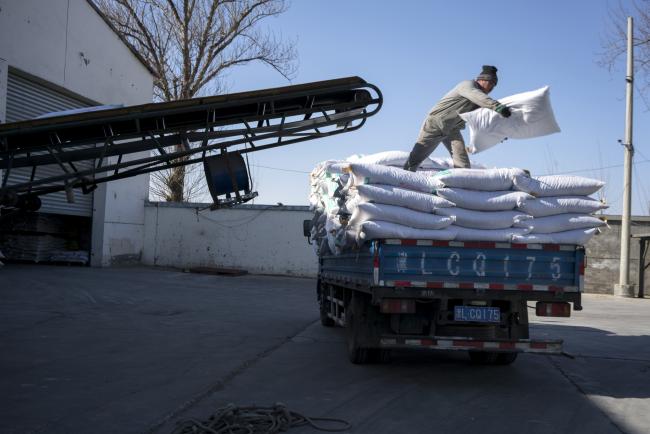 © Bloomberg. A worker loads sacks of hog feed onto a truck at the Tianjin Tianjiao Group feed mill in Tianjin, China, on Friday, Feb. 2, 2018.

(Bloomberg) — As tensions escalate between the U.S. and China, one crop is emerging as the most powerful weapon in a potential trade war: the soybean.

China is the biggest buyer of American soybeans, picking up about a third of the entire U.S. crop, which it uses largely to feed 400 million or so pigs. President Xi Jinping’s administration is studying the impact of restricting soybean imports in retaliation for U.S. tariffs on washing machines and solar panels, people familiar with the situation told Bloomberg last week.

Any China soybean curbs would directly hit farmers in Midwestern U.S. states that President Donald Trump needs to win re-election in 2020. Yet they would also pose a big risk for Xi: His nation is the world’s largest pork producer and consumer, and higher costs for pig farmers could increase prices of meat for his nation’s 1.3 billion citizens.

Food prices have long been a politically sensitive issue for China’s ruling Communist Party, which rose to power in 1949 in the wake of economic mismanagement that led to hyperinflation. A surge in the cost of everything from pork to electronics in the late 1980s also stoked dissatisfaction in the run-up to the Tiananmen Square (NYSE:) protests.

“Using soybeans to retaliate against the U.S. would be a worst-case scenario” for China, said Li Qiang, chief analyst with Shanghai JC Intelligence Co., a private grains consulting firm. “Pork is a staple meat for Chinese people.”

China’s Commerce Ministry and Agriculture Ministry didn’t immediately respond to faxed questions about the potential impact of restrictions on soybeans.

On pig farms in rural Tianjin, some 200 kilometers (124 miles) from Beijing, concern is growing. Standing next to a sow delivering piglets, Shi Ruixin said his costs would increase sharply if China squeezed U.S. soybean imports.

The seasonality of the soybean trade is one reason that China can’t easily replace U.S. supply, even though authorities in Beijing have sought to diversify. Last year, China’s imports from Brazil rose 33 percent to about 51 million metric tons, while those from the U.S. fell 3.8 percent to 33 million tons.

Chinese officials began looking into measures against soybeans in January as trade tensions with the Trump administration began to heat up. The Commerce Ministry held a meeting with some Chinese companies to get feedback, and no conclusions were reached, Bloomberg reported earlier this month. Any final decision would be made by senior Chinese leaders.

“We are extremely concerned by suggestions that U.S. exports, including soybeans, may face unjustified trade restrictions,” Agriculture Secretary Sonny Perdue said in a statement. “American farmers are facing serious economic challenges without having to face bogus barriers erected strictly for political purposes. We are examining all tools available to us to assist our stakeholders.”

Trump has sought to close a trade gap in goods with China that surged 8.1 percent last year to a record $375 billion, according to Commerce Department data. Besides the duties on imported solar panels and washing machines, the administration last year began a probe into China’s aluminum and steel sales and its intellectual property practices.

China has responded by launching an anti-dumping and anti-subsidy investigation against U.S. shipments of the grain sorghum, a substitute for corn. Restricting soybeans would have an even bigger impact on American farmers.

“It would definitely put downward pressure on prices,” said Dave Salmonsen, senior director of congressional relations with the American Farm Bureau Federation, the biggest U.S. farmer group, based in Washington. “We’re already in a surplus situation, and losing China would just make everything worse.”

Still, one U.S. farmer who hosted Xi during his 2012 visit to the U.S. doubts China will take action against soybeans. Grant Kimberley, who raises 4,000 acres of corn and soybeans northeast of Des Moines, Iowa, said Chinese soybean restrictions would lead to “dramatic swings” in prices that would disrupt trade throughout the world.

To contact the editors responsible for this story: Daniel Ten Kate at [email protected], Anjali Cordeiro