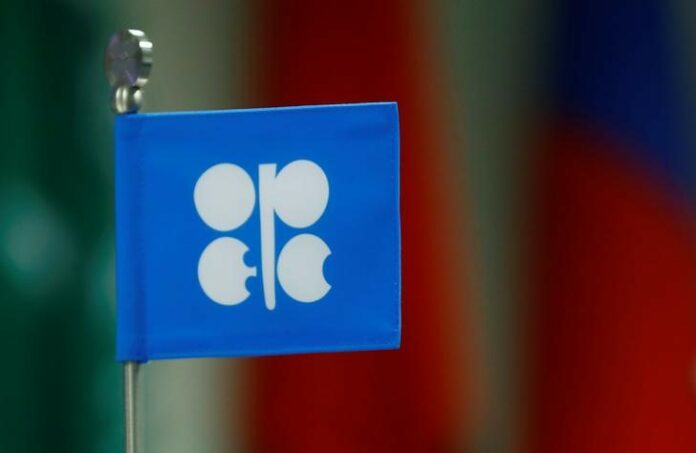 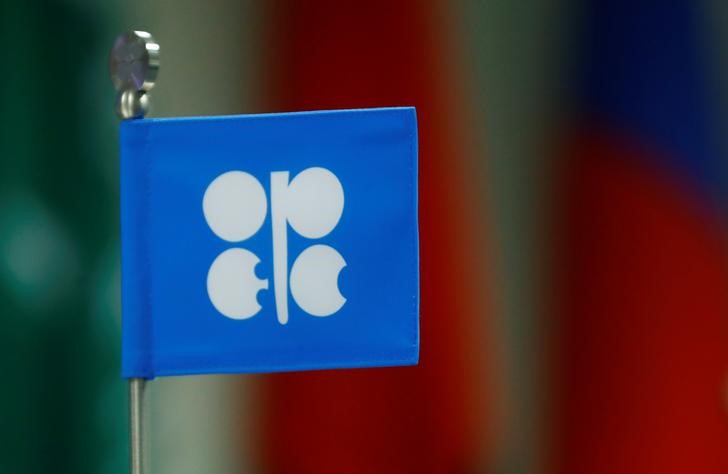 © Reuters. A flag with the Organization of the Petroleum Exporting Countries (OPEC) logo is seen during a meeting of OPEC and non-OPEC countries in Vienna

LONDON (Reuters) – As OPEC watches a near 15 percent drop in the oil price in three weeks, an important indicator in the physical crude market is flashing red in another worrying signal – the decline might be far from over.

Benchmark oil futures have plunged in recent days together with global stock markets due to concerns over inflation as well as due to renewed fears the United States is again ramping up oil output fast and will flood the market with more crude.

OPEC, including its Secretary General Mohammad Barkindo, argue the decline is just a blip because demand is exceeding supply and will guarantee prices won’t plunge again to $30 per barrel as they did in 2015 and 2016.

But several indicators in the much less transparent physical crude and products markets portray a much more bearish picture.

Traditionally, when oil futures decline, prices in the physical markets tend to rise because crude is becoming cheaper and hence more attractive to refiners.

But in the past weeks, differentials in key European markets such as North Sea Forties, Russia’s Urals or the Atlantic diesel market have all fallen to multi-months lows.

The reasons tend to be different for most physical grades but overall the trend paints a bearish picture.

“Atlantic Basin crudes are the barometer for the health of the global oil market since the region is the first to reflect looser fundamentals. Struggling North Sea physical crudes like Brent, Forties, and Ekofisk suggest that barrels are having difficulty finding buyers,” he added.

Forties crude differentials to dated Brent have fallen to minus 70 cents, down from a premium of 75 cents at the start of the year as the Forties pipeline returned to normal operation.

The Forties differentials are now not far off their lowest since the middle of 2017, when the benchmark price was trading at around $45 per barrel compared to $62 per barrel now and $71 per barrel just a few weeks ago.

A similar pattern is observed in the Russian Urals market, one of the biggest by volumes in Europe.

At a discount of $2.15 to dated Brent, Urals’ differentials in the Mediterranean are now at their lowest since September 2016, when Brent futures were hovering near $40-$45 per barrel.

“Sour grades are not in a good shape worldwide, so is Urals,” said a European trader, who asked not to be named because he is not allowed to speak publicly. That sharply contrasts with a situation from the start of 2017 when OPEC cuts of predominantly sour grades made them attractive to buyers.

“Supply is more than ample in Europe, Urals faces strong competition from the Middle Eastern grades,” said another trader on the Russian crude oil market adding that supplies of Urals to Asia were uneconomic due to a wide Brent-Dubai spread.

Adding pressure on Urals, traders expect loadings of the grade to rise in the coming months due to seasonal maintenance at Russian refineries.

A decline in physical crude values generally means better margins for refiners. But it is also not happening this time.

The profit margin refiners make on processing crude into diesel collapsed in Europe and the United States by over 18 percent over the past week, according to Reuters data.

Europe, where nearly half of the vehicles are fueled by diesel, is the home to the global benchmark for diesel prices and the biggest storage hub for the road fuel as regional refineries are unable to meet local demand.

“Oil demand isn’t that bad in general, but demand has been horrible, particularly in the United States and Germany,” Robert Campbell, head of global oil product markets at consultancy Energy Aspects, said.

“European refineries are running at very high rates since December so there is plenty of supply in the region while the weather has been warmer than usual, which led to weaker demand.”

The refined product markets were expected to significantly tighten in March and April due to a high seasonal refinery maintenance schedule. [REF/E]

But in a further indication of wavering confidence, the spread between the April Low Sulphur Gasoil futures to the May contract also crashed in recent weeks from an all-time high premium of $5 on Jan. 26 to a discount of 50 cents on Tuesday.