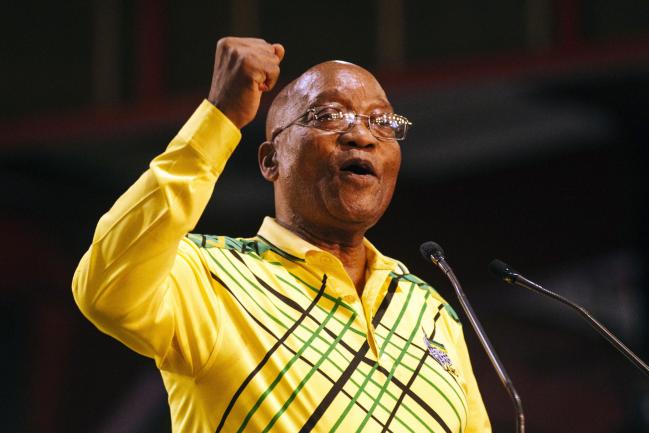 © Bloomberg. Jacob Zuma, South Africa’s president, gestures as he speaks at the 54th national conference of the African National Congress party (ANC) in Johannesburg, South Africa, on Saturday, Dec. 16, 2017. Zuma urged the ruling African National Congress to fight factionalism and consider accommodating members of rival slates in its new leadership that will be elected at its national conference.

(Bloomberg) — South Africa’s ruling African National Congress decided to tell President Jacob Zuma to step down after he refused the top party leadership’s request for him to resign voluntarily, according to five people familiar with the matter.

The ANC’s National Executive Committee took the decision during a 13-hour meeting that ended early Tuesday in Pretoria, the capital. It was called to decide on a transition of power to the party’s new leader, Cyril Ramaphosa, said the people, who declined to be identified because the decision hasn’t been made public. Calls to ANC spokesman Pule Mabe’s mobile phone didn’t connect.

“Zuma is clearly digging in, fearing what could come next should he resign prematurely,” Mark Schroeder, vice president of Africa analysis at geopolitical advisory company Stratfor, said in an interview with Bloomberg Television on Monday. “It’s an open question whether the ANC members of Parliament will vote with the multiple opposition parties to compel the president to resign.”

The ANC is trying to remove Zuma allow Ramaphosa, 65, to take over as president more than a year before the 2019 elections, giving him time to convince voters that he’s committed to meeting his pledges to rebuild a battered economy and clamp down on the graft that critics say has become synonymous with the Zuma era.

Should Zuma refuse to obey the NEC’s order to step down, the party could tell its lawmakers to use their majority in parliament to vote him out of office, clearing the way for Ramaphosa to take over.

South Africa’s opposition parties want the National Assembly to debate a motion of no confidence in Zuma this week and for parliament to be dissolved immediately after that ahead of an early election. The Economic Freedom Fighters, the third-biggest party, last month proposed the no-confidence motion that’s currently due to be debated on Feb. 22, and plans to go to court if it isn’t brought forward.

A lawyer and one of the wealthiest black South Africans, Ramaphosa is widely expected to adopt more business-friendly policies, prompting the rand to rise more than any other currency against the dollar since his election as ANC leader in December.

The ANC’s former head of intelligence, Zuma, 75, took office in May 2009, just weeks after prosecutors dropped graft charges against him. He spent years fighting a bid by opposition parties to have those charges reinstated and fending off allegations that he allowed members of the Gupta family, who are in business with one of his sons, to influence cabinet appointments and the award of state contracts.

Under Zuma, economic growth has averaged just 1.6 percent a year since he took office in 2009, undermined partly by a series of policy missteps and inappropriate appointments that rocked investor and business confidence.

Disgruntlement with his rule caused support for the ANC to fall in 2016 municipal elections and cost it control of Johannesburg, the economic hub, and Pretoria, the capital.

Zuma’s second and final term was due to end around mid-2019. He survived two previous bids to topple him in the ANC’s NEC since November 2016, but the balance of power in the panel shifted after Ramaphosa won the party presidency.