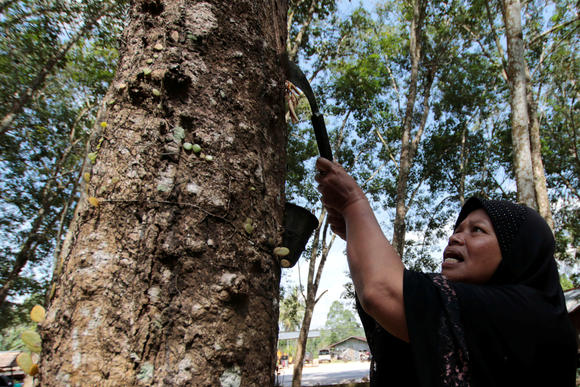 Thai government promotes use of rubber to support price

A worker in a rubber plantation in Yala province, southern Thailand. © Reuters

BANGKOK — Thailand, the world\’s biggest producer and exporter of rubber, is seeking to increase local demand for the commodity by providing financial support to buyers, as well as encouraging all government agencies to use more of it.

Agriculture Minister Grisada Boonrach said the government was trying to attract private companies, in particular small and medium enterprises, to innovate and invest in the production of more finished rubber products, such as condoms, gloves and mattresses, and move on from the past focus on exporting it as a raw material for use in the tyre industry.

Boonrach, who oversees the Rubber Authority of Thailand, said the government would set aside a certain amount of budget to help absorb the loan burden of SMEs, giving them more financial liquidity to buy up rubber from farmers.

“Initially, we plan to give Thai SMEs a soft loan or some financial support to encourage them to make other products with higher value to help consume the rubber supply. That would be better than producing commodity-grade rubber sheets to and export them as raw materials for the tyre industry abroad,” he said.

The military government has already taken the aggressive step of removing the head of the RAOT, Titus Suksaad, using a \’Section 44\’ measure, which effectively gives the ruling junta the power to intervene where it sees fit. His replacement is Thanawat Pholwichai, who has been tasked with raising the rubber price within the next few months.

Thanawat said the RAOT would be issuing new measures to balance supply and demand, cutting the fomer and increasing the latter.

All government agencies will be encouraged to use more of the product, particularly in the repair and construction of public reservoirs, playgrounds and streets.

The price of unsmoked rubber sheets, which farmers sell to rubber factories, had fallen to 47 baht ($1.5) per kilogram, far below the record high of 180 baht per kilogram reached in 2011.

The government set a target of boosting the price to 80 baht per kilogram by the end of this year.

It has also set aside 1.5 billion baht to compensate farmers for cutting down young rubber trees in order to reduce supply, according to Grisada.

Previously, the government aimed to cut rubber trees across a total area of 64,000 hectares, this year. However, individual farmers have only been willing to cut aging rubber trees, and this only in small, scattered areas, meaning there has so far been very little impact on the price.

“This time, we will urge groups of farmers to cut young trees in order to have a bigger impact in cutting production and prop up prices,” said Grisada, adding that farmers who joined the tree-cutting project would get 16,000 baht per rai.

Farmers normally cut down rubber trees after 25 years, as aging trees stop producing latex. This scheme aims to cut trees aged between one and 25 years.

The government is also seeking to put aside another tranche of the budget to encourage farmers to stop tapping rubber trees in order to cut supply in the short term.

Thailand\’s military rulers deny that the schemes to prop up commodity prices will involve buying directly from farmers at above-market price, having already been burned by the controversial rice-buying scheme which began under the regime of former Prime Minister Yingluck Shinawatra in 2013 and which incurrred huge losses. Such schemes only encourage farmers to grow without paying attention to yield, productivity or quality of the commodity.

“We are working on the details of the plan to encourage farmers to halt tapping rubber trees over the next few months to help cut supply,” said Grisada.