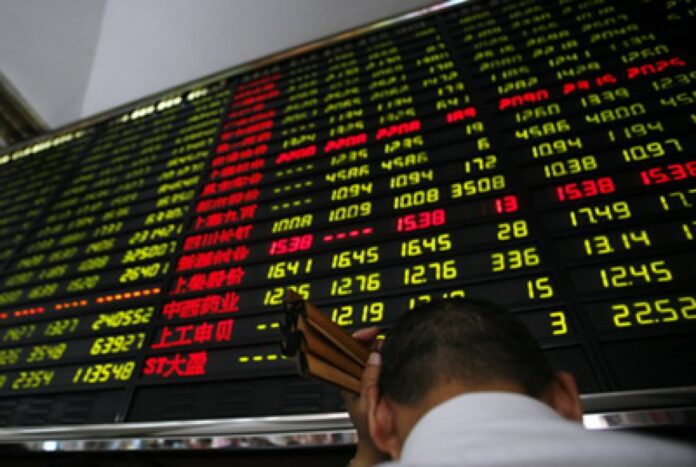 SHANGHAI: China’s major stock indexes fell more than 1 percent on Monday, posting their worst day in three weeks, on worries that slowing credit growth and tightening regulatory requirements will start to weigh on the country’s economy later in the year.

Main sectors dropped across the board, led by real estate and banking firms.

First-quarter GDP data on Tuesday is expected to show the economy carried most of its growth momentum from last year into early 2018, with analysts predicting an expansion of 6.7 percent on-year, only marginally softer than the 6.8 percent reported in the fourth quarter, according to a Reuters poll.

That resilience could give authorities’ confidence to intensify their regulatory crackdown, now in its second year.

In the latest effort by Beijing to reduce risks in the financial system, China’s central bank published rules on Friday to restrict the issuance of short-term financing notes by brokerages.

“The concern over China’s economy lingers as financing activities by the real estate sector and local governments have been restricted amid Beijing’s deleveraging campaign,” China Merchants Securities wrote in a report.

Chinese banks doled out more loans in March than February and appeared to make solid progress in reining in off-balance sheet lending that has prompted the sweeping crackdown by regulators, according to data released on Friday after stock markets had closed.

But new lending, money and total social financing grew less than expected. That followed a surprise drop in March exports reported earlier on Friday, which came amid heightened trade tensions with the United States, though most analysts believe it was likely due to seasonal factors.

“The export deficit and slower total social financing announced on Friday may have indicated weaker-than-expected macro activity in March, although we think the market has partly priced that in,” Gao Ting, Head of China Strategy at UBS Securities, wrote a note.

China’s central bank will relax its informal guidance for the upper limit of commercial banks’ deposit rates, three sources with knowledge of the matter told Reuters on Friday.

Bucking the broad trend, shares in firms based in Hainan surged after China said it plans to set up an international free trade zone and port on the southern island.