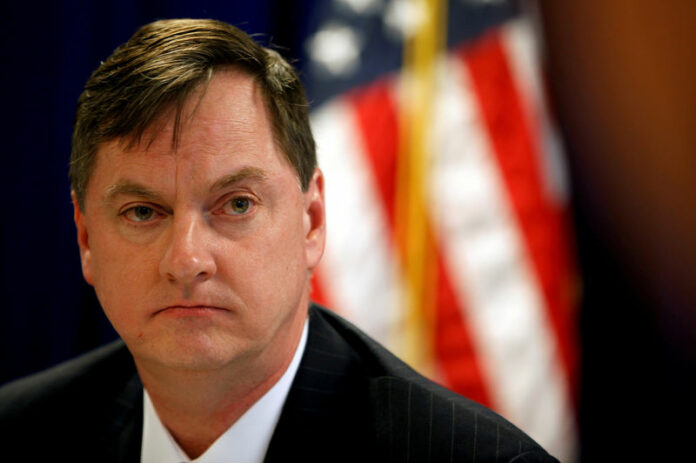 © Reuters. FILE PHOTO: Chicago Federal Reserve Bank President Evans takes a question during a round table with the media in Shanghai

CHICAGO (Reuters) – The Federal Reserve can stick to a series of gradual U.S. interest-rate increases over the next couple of years without much risk of an unhealthy surge in inflation, Chicago Fed President Charles Evans said on Tuesday.

“I don’t foresee an outsized risk of a breakout in inflation,” Evans said in remarks prepared for delivery to the Chicago Rotary Club. “As long as this picture continues, the (Fed) can increase rates gradually while monitoring any rising inflationary pressures.”

The Fed in December 2015 embarked on what is emerging as the slowest rate-hike cycle in its 100-year history, with its target range for short-term borrowing costs now at 1.5 percent to 1.75 percent despite what Evans called an economy that is firing on all cylinders.

Some economists have warned that the Fed may need to raise rates faster to prevent inflation from accelerating, now that unemployment is at 4.1 percent and expected to fall further as consumer and business spending, along with expansionary fiscal policy, fuel economic growth.

But to Evans, there is little risk the Fed will repeat the mistakes of the 1970s, when policymakers allowed the labor market to overheat, unleashing inflation and forcing the central bank to jack up rates aggressively in response. A recession ensued.

This time around, Evans said, inflation and inflation expectations are low and it is difficult to imagine escalating inflation without sharp wage gains that are not in evidence. If low unemployment continues to put little pressure on inflation, he said, the Fed may indeed be able to make smaller adjustments to rates.

“I think we have the opportunity to more patiently read – and react to – the incoming data,” Evans said.

Evans said he expects inflation to pick up, but not quickly or problematically as it did in the 1970s.

“In this setting, the federal funds rate does not need to be increased as much above its neutral setting as in the past when trend inflation needed to be taken down several notches,” he said. “Gradual policy increases in this context make sense—certainly as a way to limit the damage if policy ever actually becomes overly tight too soon.”

And if it turns out that structural factors are keeping inflation low, he said, there was little monetary policy could attempt in trying to fix the mismatch between the needs of employers and the skills of available workers that may be the root cause.