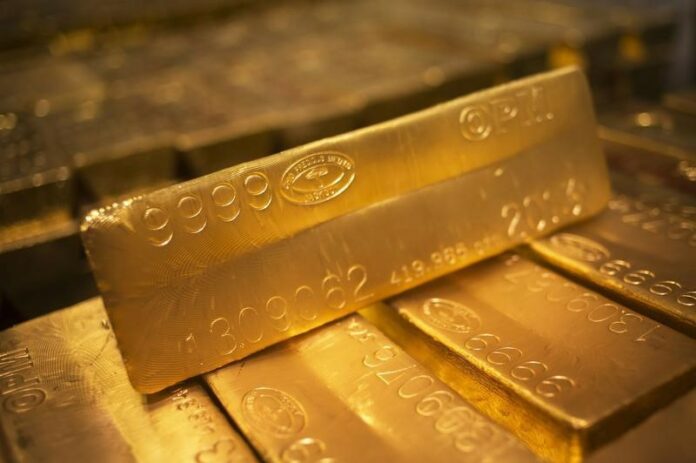 The inverse relationship in the two assets held in what appeared to be a reversal of the trade seen on Monday. The greenback had come under pressure a day earlier after U.S. President Donald Trump accused Russia and China of in a Twitter post, hitting a three-week low overnight.

A stronger greenback makes the dollar-denominated metal more expensive for holders of other currencies.

With many market participants focused on earnings, little reaction was seen to Tuesday’s economic data.

Both and rebounded in March from declines seen a month earlier, with . In one note of concern, despite the increase, single-family homebuilding did decline 3.7% while permits for construction also dropped to their lowest level since September 2017. The declines may suggest a slowing real estate market.

gave a positive sign as with particular strength in business equipment and cars.

Meanwhile, amid a slate of Federal Reserve policymakers scheduled for appearances on Tuesday, current SF Fed president -who will take over for William Dudley at the pivotal NY Fed in June- repeated his view that the U.S. central bank should continue on the gradual rate hike path to reduce the risk of the economy overheating.

Minneapolis Fed chief responded to a Wall Street Journal article via Twitter, insisting that there was no “extreme labor shortage” and that businesses were simply unwilling to pay for higher quality workers.

At the time of writing, in semi-annual testimony to Congress, Fed governor stuck to the topic of bank supervision and had yet to make any references to monetary policy.

Still on the docket, , and will make appearances later on Tuesday as investors look out for any clues on the future path of interest rates.

Traders are currently pricing in around a 95% chance of a rate hike in June, according to Investing.com’s Fed Rate Monitor Tool. Odds of a third rate hike by December was seen at about 85%, unchanged from early morning data.

from a year earlier, official data showed on Tuesday, unchanged from the previous quarter.

The Asian nation is the world’s largest consumer of the red metal.